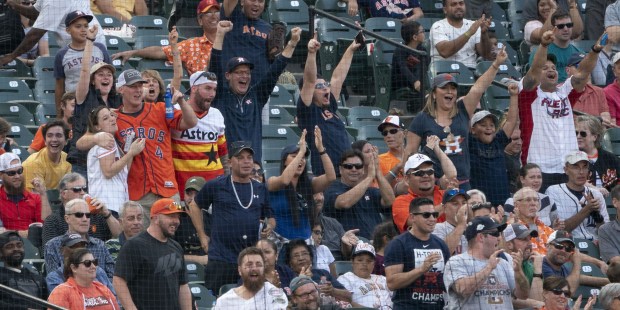 Sure, the Nationals’ improbable victory was inspiring, but take a look at the classy response from the losers.

The Washington Nationals made baseball history Wednesday night with their World Series victory of the Houston Astros, capping an improbable Cinderella story in which they went from having a 19-31 record on May 24 to toppling the mighty Houston Astros.

Losing sometimes brings out the worst in people (see the now infamous treatment visiting Astros fans received at Yankee Stadium). While it must have been painful to lose four games at home in the World Series, especially for a team that had MLB’s best record at home (60-21), Houston Astros fans have shown themselves to be not just really good sports, but apparently really  decent people. Check out these 10 tweets that should make Houston proud:

An Astros fan who felt the need to take out an ad complimenting Nationals fans:

Remarkable ad addressed to @Nationals fans from an @astros fan in the sports section of this morning’s @washingtonpost. #WorldSeries pic.twitter.com/kgvF9vYpLX

What happened when a Nationals fan met an Astros fan at the airport:

Just had a nice conversation with an Astros fan (he saw my Nats hat) in the Nashville airport of all places. We’re both pumped for an exciting game 7. Baseball, man! #STAYINTHEFIGHT

What it was like for a Nationals fan to meet  Astros fans at Nationals Park:

Just got embraced by a few Astros fans telling us what a nice park & fans we have & how much they appreciate it after NY. We congratulated each other on making it this far in the WS. This is what baseball is all about…people enjoying the game & each other. #nats #worldseries

What it was like to be a Nationals fan in Houston’s Minute Maid Park:

Last night at the game I saw a lot of laughs and smiles between Astros fans and Nats fans. With the bad taste left from the Yankees…it was very refreshing to see everyone being so nice and respectful and having fun together 🥰

The @astros should be proud of the fan culture they’ve built. I’ve never been to an away game in any sport where the fans were more friendly and welcoming before, during, and after the game. It’ll be easy to cheer for them in the future (when they’re not playing the @Nationals).

Astros fans are sooo nice. They’re stopping us on the concourse to say hi and wish us luck 😭😭

Great to hear #Nationals fans being interviewed in Houston and saying how friendly and welcoming all the Astros fans were to them tonight.

I want to note that when I got on the field and looked up at the crowd, there were almost an equal number of Nationals fans and Astros fans staying to watch the trophy presentation. It’s amazing how great baseball makes everyone celebrate. Those two teams played great baseball.

Congrats to the Nationals family from a nearly lifelong 🤘🏻🤘🏻 Astros fan. What a gritty and fearless team y'all have. Y'all deserve it . Enjoy , and hopefully we will see y'all there again for round 2 next year.