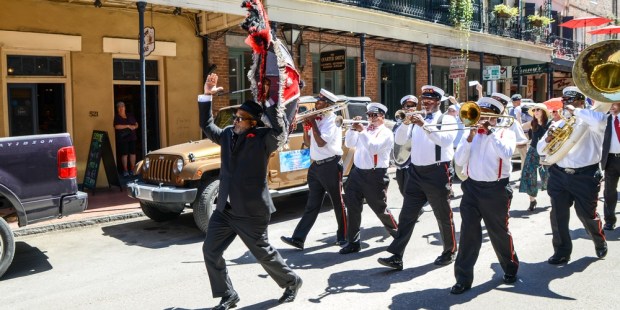 “I want to be in that number, when the saints go marching in.”

November is here and it opens with the Solemnity of All Saints. Today we celebrate the lives of our Church’s most faithful and holy members, known and unknown, as we contemplate our desire to live our best lives with Christ.

To strive to live as the saints is a daunting task, but also one that fills the soul with jubilation. It is then perhaps all too fitting that this Catholic holiday holds what may be the most jubilant theme of all holy days, “When the Saints Go Marching In.”

Developed from a spiritual and popularized by a 1938 Louis Armstrong recording, “When the Saints Go Marching In” is a timeless classic and an excellent example of a hymn that is widely popular in the secular world. The song is simple, but when great musicians join in then it becomes a complex masterpiece of jazz that rarely fails to give us goosebumps.

We’ve assembled a list of some of our favorite renditions of “When the Saints Go Marching In,” to give you the best possible soundtrack to your All Saints Day.

Louis Armstrong’s version is still the most popular, and his gravelly voice is the one many people hear when they think of the song. From this recording, it’s easy to see how the song took off, thanks to the unabashed joy Armstrong brings to the performance.

In 2012 esteemed composer and violinist André Rieu took the stage with two gospel choirs who stole the show. This video is extra fun because it features Rieu in a kick line! The only way it could be better is if he started playing his violin like a New Orleans fiddle.

Mahalia Jackson, also known as the First Lady of Gospel, was called “the greatest voice of the century” and from the way she sings the tune it’s easy to see why. Jackson’s rendition is all about her incredible vocal performance that stands above all the rest.

Connor Going runs a YouTube channel where he likes to create a choral arrangements using multiple tracks of his own voice. He has a lot of fun with the video work on this “When the Saints Go Marching In,” and he shows incredible talent by performing all voice parts and the piano by himself.

At its heart, “When the Saints Go Marching In” is a song of New Orleans, and there are few performances that can compare with the renditions one might find on the Big Easy’s streets. The video does not tell us who this incredible musician is, but we’ve never heard a clarinetist play with such skill and ease. It’s also fun to watch the guitarist look so bored while making such fast chord changes.

Ever wonder what “When the Saints Go Marching In” would sound like in the styles of Chopin, Mozart, Bach, or even Latin Jazz? Well wonder no more, for this video will take you through several different versions.