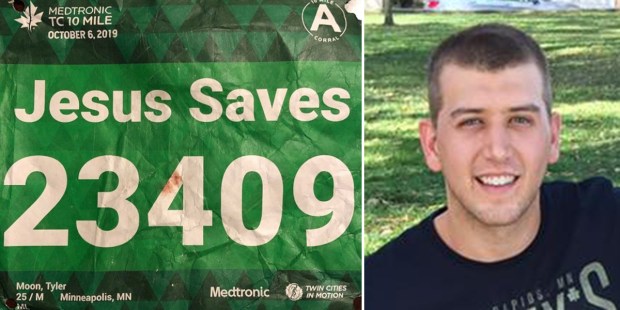 God came through for Tyler Moon just when he needed it most.

When Tyler Moon watched his future brother-in-law run the Medtronic Twin Cities Marathon last year, he was inspired to put on a pair of sneakers and get running himself. Although in good shape, the 25-year-old felt the marathon was a tall order so he opted to join in the Medtonic TC 10 mile race in Minneapolis this past October 6.

With his fiancée, Amy Greene, and his parents there to support him, he was ready to take on the race. He asked to have the words “Jesus Saves” written on his bib, instead of his name. “I wanted to have a statement so that when people saw me run by, it pointed them to Jesus,” the logistics worker at General Mills explained to Twincities.com. The runner couldn’t have anticipated just how true those words would prove to be.

Moon set off on his race and his watch recorded he was running eight-minute miles. However, after the first mile, when he grabbed a quick hug from Greene, he can’t recall any more of the race. Although he reached the eighth mile marker, the former college football player experienced ventricular tachycardia, which causes a fast and irregular heartbeat, and in Moon’s case, prevented his heart from pumping blood for 10 seconds. This led to a heart attack and multiple injuries after falling to the ground, including fractured bones in his face and a concussion.

And this is where Jesus stepped in… in more ways than one!

Behind Moon was a runner called Jesus Bueno, known as Jesse. The 43-year-old happens to be a certified registered nurse anesthetist and was able to see that the fallen runner was in danger. He instructed others to call 911 while he performed CPR with a colleague of his who was also running the race.

In Minnesota, a runner named Tyler Moon decided to wear “JESUS SAVES” on his running bib for a ten mile race! He collapsed during the race and had a heart attack! Luckily a nurse named JESUS Bueno was running behind him, who used CPR to save his life! 😎🙏 https://t.co/Im7ikujqBT pic.twitter.com/4OZMDoGlpR

When the paramedics turned up, Bueno continued to assist them before continuing his race (impressively, he completed the 10 miles). After finishing the race, he was able to contact the stricken runner via Facebook having remembered his bib number and was relieved to see he was recovering well.

Doctors believe that the heart attack was an anomaly and that Moon will be fine. Meanwhile, the five bones in his face that he broke when he fell to the ground are also healing, so hopefully Moon and his fiancée will be picture perfect for their big day in January 2020.

The couple, who are both Christians, seem to have taken everything in stride, sharing: “We’re just happy God had it happen where it did, where there were all these wonderful people that stepped up. Like I’ve said, I went for a run, then all of a sudden, a bunch of strangers saved my life.”

Moon also shared with the Star Tribune: “I’m just lucky I was literally saved on Earth,” adding “I think that’s the most important thing, after Jesus. It’s the people Jesus put there.”

Moon told Aleteia that he really wanted to have all those who were instrumental in saving his life also mentioned by name. These include Dave Soucy, a radiology technologist at Regions Hospital in St. Paul who sprinted over to help him when he fell; nurse and fellow runner Tommy Carlson who helped with chest compressions; Grant Morrison, a Fairview physician out for a run; Jeni Rymer, a nurse anesthetist from Regions who had been cheering the runners from the sidelines with her husband and baby; and Paul Larson, a member of the National Ski Patrol working as a medical volunteer at the mile 8 checkpoint.

The full list of all those involved in saving Moon’s life, as well as further details of how the event unfolded, can be found in the Star Tribune article by Jennifer Brooks.