Coronation: All her queenly authority is for defeating her sworn enemy 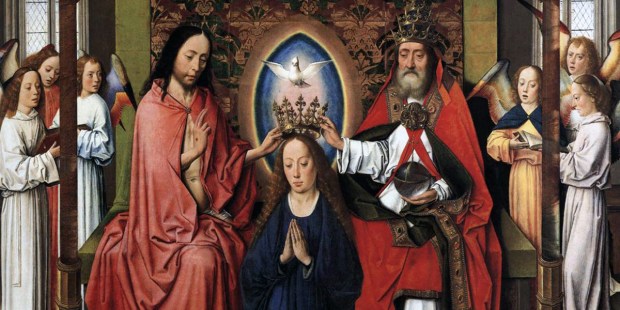 In this month of the Rosary, take a moment to reflect on the Fifth Glorious Mystery.

O Virgin, most pure, wholly unspotted, O Mary, Mother of God, Queen of the universe, you are above all the saints, the hope of the elect and the joy of all the blessed. – St. Ephrem the Syrian

Just as the Rosary begins with the House of David, when the angel of the Lord tells Mary that her son will reign over a kingdom without end, the Rosary ends with the ascent of Mary to that promised everlasting kingdom. God is a faithful father who fulfills his promises. The Virgin Mary bore a son, and now she shares his crown.

A great sign appeared in the sky, a woman clothed with the sun, with the moon under her feet, and on her head a crown of twelve stars. She was with child and wailed aloud in pain as she labored to give birth. Then another sign appeared in the sky; it was a huge red dragon, with seven heads and ten horns, and on its heads were seven diadems. Its tail swept away a third of the stars in the sky and hurled them down to the earth. Then the dragon stood before the woman about to give birth, to devour her child when she gave birth. She gave birth to a son, a male child, destined to rule all the nations with an iron rod. Her child was caught up to God and his throne. (Revelation 12:1-5)

Every grace given to Mary is given in light of the redemption wrought by her son. Pope Pius XII says, “As Christ is our Lord and King by a special title because He redeemed us, so the Blessed Virgin (is our Lady and Queen) because of the unique way in which she has cooperated toward our redemption.”

Mary’s title “Queen” is hers because of the work of Christ our King.

Mary is not the first queen mother of the Bible to reign with her son. The Book of Kings relates, “Then Bathsheba went to King Solomon to speak to him for Adonijah, and the king stood up to meet her and paid her homage. Then he sat down upon his throne, and a throne was provided for the king’s mother, who sat at his right. She said, ‘There is one small favor I would ask of you. Do not refuse me.’ The king said to her, ‘Ask it, my mother, for I will not refuse you’” (1 Kings 2:19-20).

The mother of the Lord is no less than the mother of Solomon. What son would refuse his mother any favor she asked?

The Queen of heaven plies all of her authority to one end, and one end only. She strives only to exalt her son by working toward the final defeat of her sworn enemy: the devil. Satan tries to reign in his own kingdom. Yet he is a slave to his own desires. Mary, who has given herself completely over to the Father, is free. She reigns gloriously, a humble servant of the Lord. She is the lowliest, now exalted to the highest heights.

And what are the ornaments of this great Queen? The heavens are her throne and earth her footstool. The Rosary, the crown of the Virgin Mary, graces her brow. Her scepter? The lily of her own purity.

Jesus has given our Lady the highest graces of any saint. Her ascent to the throne of heaven is nothing more than our Lady taking her rightful place.

During the month of October, Aleteia has offered a short reflection on each of the 20 mysteries of the Rosary. Follow it here.