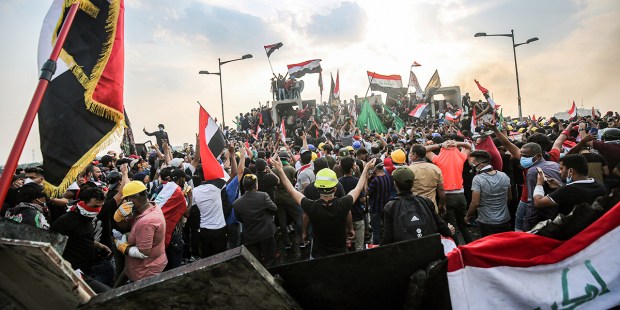 Some, mostly young Christians on the Nineveh Plains have expressed solidarity with the protestors in Baghdad.

Iraqi Christians, concentrated in the north of the country, are far from the epicenter of deadly protests in Baghdad, but their fate may be tied to the outcome of what demonstrators are calling a “revolution” in Iraq.

While protestors in Baghdad have emphasized interfaith unity, protests have in fact been concentrated in Iraq’s nine Shiite provinces, with limited participation from the Sunni Muslim and minority-dominated north of the country.

Most Christians live close to Mosul, Iraq’s largest Sunni Arab city, where the streets have been quiet. Mosul residents told Aid to the Church in Need (ACN) that after three years of war, people are tired of violence and “do not want war anymore.”

Protesting, they also said, might lead to accusations that they are ISIS sympathizers trying to bring down the Iran-backed regime—which could lead to an even more violent reaction from the militias and security services who control the city.

Christians in northern Iraq largely live in towns where, because of the fraught security situation, protesting is banned by security forces and the Nineveh Provincial Council. At most, some churches have held services calling for peace.

At Sts. Behnam and Sarah Church in Qaraqosh, the largest Christian city in Iraq, Catholics gathered to pray for peace in their country, with altar servers carrying Iraqi flags for the occasion.

Many of the issues highlighted by protestors in Baghdad are the same ones faced by young Christians: unemployment, corruption, and a government steered by Iranian interests. On the Nineveh Plains, many Christians live under the control of Iranian-backed militias, who have been accused of extorting the local population, interfering with the economy, and intimidating minorities.

These factors explain why some, mostly young Christians on the Nineveh Plains have expressed solidarity with the protestors, some of them apologizing on social media for not being able to come out on the streets.

On Oct. 27, a group of Christian activists launched a campaign of solidarity, with the slogan: “We are Christians of the Nineveh Plains, in solidarity with our fellow protestors. We apologize for not being able to demonstrate because in our cities we are not allowed to demonstrate.”

Other Christians are skeptical about how much the protests will achieve and they have concerns about violence. Since the protests began Oct. 1, at least 200 protesters have been killed by Iraqi police. If the situation deteriorates, Christians and other religious minorities could again become victims of the political strife that has characterized Iraq since 2003.

Between 2003 and 2017, at least 1,357 Christians were murdered by hostile sectarian militant groups, according to the Shlomo Organization for Documentation; Christians were bystanders in a civil war that disproportionately affected Iraq’s ancient religious minorities.

Syriac Catholic Archbishop Yohanna Petros Mouche of Mosul told ACN: “It is just and appropriate that the oppressed and others deprived of their rights demonstrate—provided that they will be listened to and respected.

“This is not the case in Iraq. There is no government, no respect for the human person, and people may use these circumstances to take revenge on others. Moreover, on the Nineveh Plains, we have had enough.

“I hope that prayer will, in some way, play a role, accompanied by an intervention that will make things calmer and bring different ideas together. In the end, it’s the people who will be the victims.”

In a statement, the Chaldean Catholic Patriarch Cardinal Raphael Sako, who on Oct. 28 cancelled a planned trip to Hungary and visited wounded protestors in a hospital in Baghdad, called on the government to listen to the protesters.

He said: “We appeal to the conscience of Iraqi officials to listen seriously to their people, who are complaining of the current miserable situation, the deterioration of services, and the spread of corruption.”

“This is the first time since 2003 that the Iraqi people are expressing their peacefulness away from politicization, breaking sectarian barriers and emphasizing their Iraqi national identity.”

This article was published at Aid to the Church in Need’s website, and is republished here with kind permission.