The great abbey of St. Augustine marked the rebirth of Christianity in England 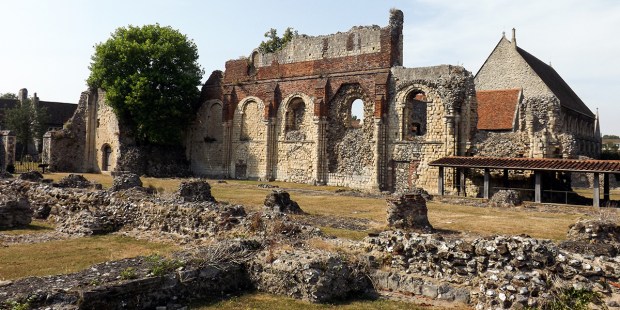 It functioned as a Benedictine monastery from its foundation in 598 until the English Reformation.

Augustine was the prior of a monastery in Rome when Pope Gregory the Great sent him as the leader of a mission (historically referred to as the “Gregorian Mission”) to (re)christianize Britain. His mission began in Kent, where St. Bertha had married the pagan King Aethelbert. Aethelbert not only supported Augustine’s mission and built a church for Bertha, but also later converted to Christianity, giving the new missionaries led by Augustine a plot of land outside the city walls on which they could build their monastery.

It seems the monastery was at first built as a burial place for Anglo-Saxon kings, but it soon became a missionary school, and over time it acquired an extensive library. Its scriptorium produced many manuscripts, thus turning the abbey, quite soon, into a center of preservation and production of knowledge. From this abbey, Christianity spread all around Southern England, marking a rebirth of the Church on the island.

Tradition tells us that after his conversion Aethelbert ordered the church to be built “in splendor,” and to be dedicated to Saints Peter and Paul. Only after the death of Augustine of Canterbury was this monastery then referred to as St. Augustine’s. Since the monastic community was dissolved after the English Reformation, the abbey was for the most part dismantled until the mid-19th century, when the building began to be used again for educational purposes. Today it is a UNESCO World Heritage Site.

Read more:
A brief (and slightly biased) history of Christianity in Britain