How St. Martin de Porres taught this priest/sculptor about racism 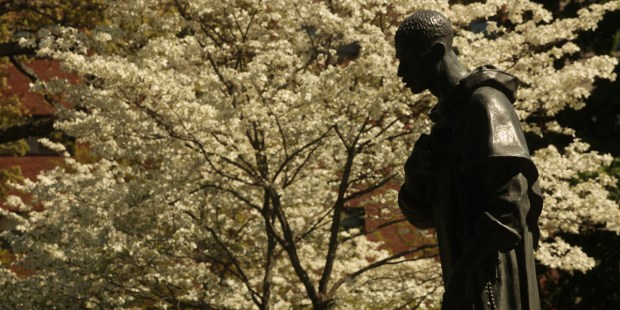 For Fr. Thomas McGlynn, the story of St. Martin’s life sparked a healing at the level of the soul, which then bore fruit in creativity.

“I grew up with the general white prejudice against blacks that was common at that period when I was a child sixty years ago . . . My meeting with Martin de Porres changed all that.”

The Christian life should open a channel from heaven to earth. In acting as a point of connection between the two worlds, a disciple of Christ prepares a path toward another’s encounter with the divine.

Among Christ’s followers are matchmakers who constantly seek to introduce the soul to an experience of the transcendent. For some, these spiritual introductions can mark the development of a friendship. Friendship with God allows one to share in God’s own life, something Christians call grace. The best of the matchmakers are named saints. The saints are those who, by their lives, reveal an exceptional closeness to God. On account of that nearness, the saints have been some of the sturdiest bridges linking heaven and earth and God and humanity. To meet a saint is to be touched by grace.

St. Martin de Porres was a revered healer in 17th-century Peru. The sanador of Lima’s El Rosaria priory, he treated the wounds and ills of his fellow Dominicans before leaving the grounds of his religious community to visit those among the poor who were unable to come to him.

His birth in 1579 was marked by ignominy. St. Martin’s father was a Spaniard; his mother was a freedwoman of African descent. Class and race made marriage between the two impossible, and St. Martin was raised by his mother. Despite some education and intellectual ability, his mixed-race ancestry closed many opportunities and bound him to the lower rung of colonized Peru. Around the age of 15, St. Martin found a home in El Rosaria as a donado, a lowly position entitling him to live with the Dominican community in return for performing menial tasks.

Many within the community recognized St. Martin’s patience and steady disposition, as well as his talents as a barber and the solicitude he showed toward the sick. In spite of the prejudices of many of the friars, the prior ultimately ignored Peruvian law barring those of African descent from becoming full members of a religious community. St. Martin professed vows as a religious lay brother in the Dominican order in 1603.

Assigned to the infirmary where he cared for the ill, St. Martin’s reputation for unfailing patience was eclipsed only by his many successes in restoring to health those under his care. When his work in the priory was complete, he traveled throughout Lima’s environs, seeking especially those who could not afford any form of medical care otherwise available at the time. St. Martin’s biographers note his particular compassion toward those most in need. His sense of solidarity with the most vulnerable of creatures extended even to animals commonly considered pests. Depictions of him with mice are intended to symbolize that relationship.

St. Martin’s reputation for sanctity grew after his death. Friends and devotees collected relics of him to maintain some connection to his spiritual legacy.

Some of those touched by the life of St. Martin lived far removed from the Peru of the 1600s. Among them was Dominican priest and sculptor Father Thomas McGlynn (1906-1977). Distance in time and geography did not separate McGlynn from St. Martin’s curative presence. For McGlynn, the story of St. Martin’s life sparked a healing at the level of the soul, which then bore fruit in creativity. Their meeting illustrates the coming together of race and grace.

By his own account, Tom McGlynn was raised in an era of racial insensitivity. “I grew up with the general white prejudice against blacks that was common at that period when I was a child sixty years ago,” the priest-sculptor said later in life. He explained further that his “meeting with Martin de Porres changed all that.” It was perhaps providential that the first sculpture McGlynn produced as a Dominican would be of this friar of African lineage.

McGlynn’s depiction of his subject expresses St. Martin’s saintly combination of physical strength and gentle disposition. The crucifix and the broom represent St. Martin’s deep love for God and his service to the community. The first version included a mouse to symbolize the saint’s affection for the most simple of God’s creatures. Over the years, McGlynn would produce modified iterations of his first St. Martin sculpture, each with the saint in a similar stance while reflecting a slightly modified mood and expression. Two different versions of the St. Martin statue are located on the grounds of Providence College’s campus. A bronze sculpture of the earliest version is found near the koi pond outside Hunt-Cavanaugh Hall. A later style is found in the statue in front of St. Martin Hall.

The first St. Martin was exhibited in a liturgical art presentation in New York City, where it attracted further inquiries into the saint’s life. The interest sparked by the exhibit led the Dominicans to produce a 10-page pamphlet in English on the saint’s life. Over 50,000 copies were distributed over a three-year period.

Familiarity with St. Martin’s life had lasting effects on McGlynn’s sensitivity toward race. As a priest, McGlynn was instrumental in helping to form the Blessed Martin Interracial Center in Chicago. During his time in the Midwest, McGlynn advocated for laws to abolish real estate covenants designed to prohibit the sale of property to racial minorities. His concern for race relations also lead to other creative projects: McGlynn began working in 1940 on the script to Caukey, a play that envisions an American society where Black Americans are in the majority and Whites make up an oppressed minority. Caukey was performed off-Broadway in 1944.

McGlynn’s final project was a medallion of Pierre Toussaint, a former enslaved man who dedicated his life to charitable works. Toussiant’s cause for canonization is currently under investigation. His canonization would make the subjects of McGlynn’s first and last works as an artist friar saints of African descent.

The Catholic Church has named St. Martin the patron saint of those committed to racial harmony. For the priest-sculptor McGlynn, the path toward racial consciousness began with his introduction to this Afro-Peruvian descendent of enslaved persons. St. Martin’s life opened McGlynn to a greater understanding of a God who made humanity in full color. In turn, McGlynn’s depictions of St. Martin reflect the effect of grace on an artist’s more enlightened understanding of race.

This article was first published by Providence College’s Center for Catholic and Dominican Studies and is republished here with kind permission.