Aid to the Church in Need begins repair of churches, church buildings in Christian homeland in Iraq 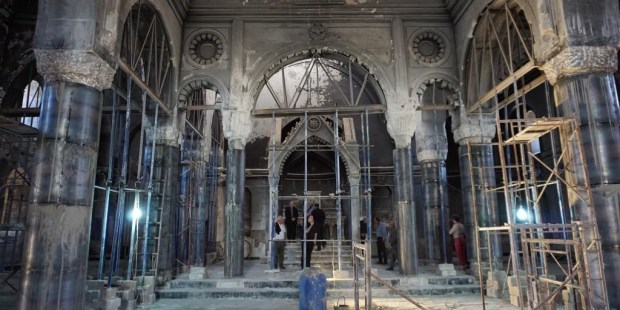 Some 45 percent of the population that had fled the onslaught of ISIS in 2014 has returned; shops have reopened, many houses have been repaired, and Church life has picked up thanks to this essential aid.

Life in the Christian region in Iraq, north of Mosul, the Nineveh Plains, is slowly resuming, two years after the region’s liberation from ISIS occupation.

On Oct. 30, Philipp Ozores, Secretary-General of Aid to the Church in Need (ACN), visited the Nineveh Plains to announce the beginning of a major new phase of support for the local Churches: the rehabilitation of Churches and other Church-owned properties, in order to restore a feeling of security to residents who have returned from exile in Kurdistan.

Some 45 percent of the population that had fled the onslaught of ISIS in 2014 has returned; shops have reopened, many houses have been repaired, and Church life has picked up: teaching the catechism, as evident in radio, schools, and women’s groups. A large part of this return to normalcy has been supported by ACN donors.

Since 2014, ACN has spent $26M in emergency aid to support Christian Internally Displaced People, primarily through food and rent support, plus the repair or reconstruction of 2,086 homes—37 percent of the total Christian family homes damaged or destroyed—in Baghdeda, Bartella, Tesqopa, Karamless, Bashiqa, and Bahzani.

Nonetheless, emigration remains a grave threat to the future of Christianity the region. Many Christians are losing hope that their community can again flourish in Iraq. The rate of departures is such that urgent action is needed to restore security and economic vitality to give Iraq’s indigenous Christians a reason to remain in their homeland. Rebuilding Churches and church-owned buildings is part of the answer.

ACN hopes that this new initiative will restore hope for Iraq’s remaining Christians—a battered and fragile mere 10 percent of the 1.5 million Christians living in the country prior to 2003, when the US invaded the country. The subsequent civil war saw the religiously motivated murder of at least 1,000 Christians.

Ozores told members of the Nineveh Reconstruction Committee (NRC)—priests representing the Chaldean Church, the Syriac Catholic Church, and the Syriac Orthodox Church— that they can count on ACN’s ongoing support. He said: “We are with you, and we will remain with you in Iraq.”

Chief among the new building plans is Great Al-Tahira Church, the largest church in Iraq, in Baghdeda, Iraq’s largest Christian city, which is 95 percent Syriac Catholic. ACN will be financing the $560,000 restoration of the interior of the church; ISIS militants, before they fled, piled up the pews and furniture of the church in a heap and set it alight,

Every day, parishioners gather in the remains of the church; many are saddened to worship in a visibly desecrated church, which was once the pride of the town. Many people are still recovering from the trauma of displacement, the murder of relatives, and their knowledge that their homes were occupied for two years by ISIS.

After the interior is restored, more work will need to be done to restore the Church’s damaged exterior and bell tower. The Syriac Catholic Archbishop of Petros Mouche of Mosul told ACN: “For us, this church is a symbol. This church was built in 1932, and it was the villagers of Baghdeda who constructed it.  For this reason, we want this symbol to remain as a Christian symbol to encourage the people, especially the locals of Baghdeda, to stay here.”

The archbishop added: “This is our country, and this is a witness that we can give for Christ … I would like to take advantage of this occasion to thank all the people who help, as these organizations can’t help us without the support of their donors.”

ACN also approved almost $1M to reconstruct the Najem Al-Mashrik Hall and Theatre in Bashiqa, a Yezidi-Christian town, with a large Syriac Orthodox population. The Hall will allow the local Church to resume hosting large wedding ceremonies—a spur for young people to make their home there, rather than emigrate.

Father Daniel Behnam, the local priest, said: “We are happy with the reconstruction of Najem Al-Mashrik Hall. This project will help ensure the survival of Christian families, and provide them with important services. In particular, it will help young people, providing a space for pastoral, cultural, and youth activities.”

ACN also signed off on 13 other projects amounting to $800,000 for various rehabilitation projects benefitting Syrian-Catholic, Chaldean and Syrian-Orthodox Christians.

This article was first published at Aid to the Church in Need’s website and is republished here with kind permission.