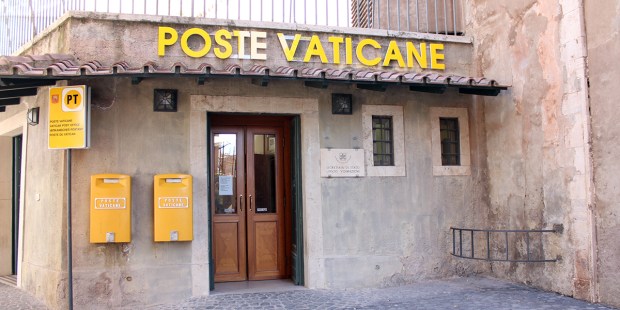 For one thing, the earliest “post” men were, in fact, the Apostles.

In the era of instant messaging and emails it’s easy to forget the important role played by postal services. But there would have never been email without the invention of the postal service. And we can trace much its creation back to the Catholic Church.

Indeed, the word “post” is believed to be derived from “apostolic” letters sent by the Apostles to Christian communities in the early days of Christianity. One of the first use of the word “post” to indicate sending and receiving letters is found in a system of laws signed by Charlemagne in the year 779. But Catholics were known for a rudimentary postal service even before that. Some professional messengers, called “cursores,” would spend weeks riding their horses to get messages from one Catholic community to the next.

By the Middle Ages, all major abbeys had a de facto postal service in place and could send handwritten letters through messengers that reached their destination by horse or by foot. These early networks were so good that by the 16th century some ambassadors of European states representing their countries in major capitals asked the pope if they could use his postal service to receive their own messages. In 1499 Pope Alexander VI authorized the creation of National Post in Spain. The kingdoms of Naples and Milan shortly followed.

By 1852 the Vatican introduced the use of stamps, first pioneered in England a few years earlier. Each letter could now be sent by attaching an adhesive label that proved that all postal taxes had been cleared. The introduction of the stamp increased the efficiency of postal services and the Vatican Postal service became renowned all around Europe for its reliability and efficiency.

The release of Vatican stamps was managed by a dedicated cardinal assigned with the duty of creating mailing tariffs. Unlike the stamps of major kingdoms, the Vatican didn’t feature the facial features of the pope on its stamps. Vatican stamps were recognized by the symbol of the Holy See, the papal tiara and two crossed keys. Another major innovation came in 1870 with the introduction of the postcard, a much cheaper version of the stamped letter, that contained illustrations.

On February 11, 1929, the Kingdom of Italy and the Holy See signed the Lateran Treaty, a package of laws that recognized the Vatican City as an independent state. A series of changes followed: the Holy See was reimbursed for lands that had been annexed to Italy in 1870, a new road was built to connect the Vatican City to the heart of Rome (Via della Conciliazione) and the Vatican’s own postal system was established.

From February 1929 all papal mail was sorted by the newly established “Poste Vaticane” via its iconic yellow mail boxes. Stamps started to feature the image of the pope along with the Vatican symbol.

Today, all letters and packages sent to and from the Vatican are still managed by the nearly 100-years-old Poste Vaticane.

And Vatican stamps are some of the most sought after items by stamp collectors because of their rarity and the role that they played in the history of postal services. Next time you hit “send,” thank those early apostles for the idea.