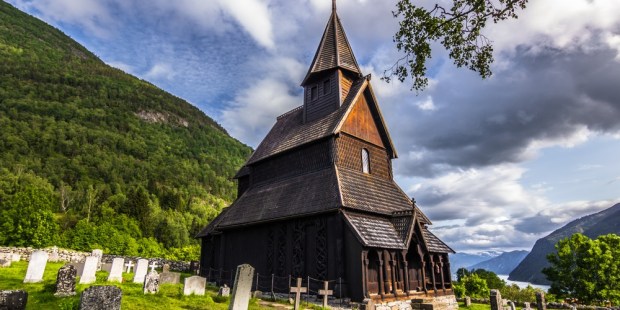 With a new timeline of church construction, experts question what we know of the rise of Christianity in Norway.

Stave churches are medieval houses of worship, elaborately constructed from timber, which were once the most popular style of church in Northwestern Europe. It is estimated that there were once around 2,000 of these churches dotting the Norwegian landscape, however today there are only 28 surviving. Now, an advancement in the field of dendrochronology has led to a new study that suggests Norway’s historic stave churches are older than previously thought.

David Nikel, from Forbes, reports that the largest discrepancy between the old measurement and the new, known as photodendro, was found in Urnes Stave Church, pictured above, the oldest known stave church and one of Norway’s eight locations protected as UNESCO World Heritage Sites. While originally dated to around 1130, the church is now believed to be as old as 1070.

The team of dendrochronologists studied two other stave churches with photodendro and found similar differences in age. Hopperstad stave church, previously estimated at 1125-1250, was revealed to be much more firmly dated between 1131-1132. Kaupanger stave church was also dated within 2 years, 1137-38, where it was once thought to have been built between 1170-1200.

This new dating has led to new insights concerning the rise of Christianity in Norway, which, as Nikel notes, was believed to have been brought back from England by Viking converts, most notably St. Olav. Cultural historian Sæbjørg Walaker Nordeide from the University of Bergen suggested to NRK that other locations in the country have shown signs of early Christian activity.

The new technology, photodendro, is so effective because it relies on the analysis of photographed images, rather than drilling into the wood. With this non-invasive methods, historical wooden structures all over the world can be accurately dated without compromising their preservation.

Gemini reports that through the use of photodendro they can identify the types of trees in the forests where the wood was harvested and even the climate of the region in which they grew. Experts expect that they will be able to learn a lot from preserved sites they previously could not study, thanks to photodendro.