The Catholic mom who saved hundreds of children from genocide 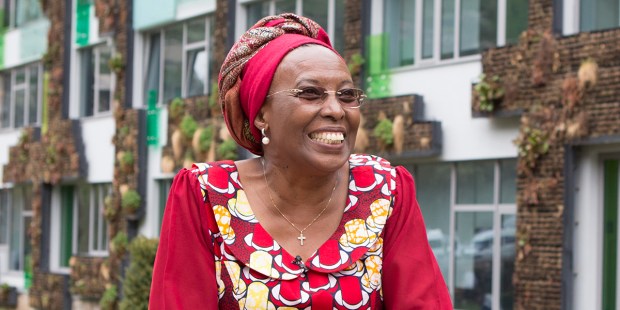 Her faith gave her the courage to face unspeakable evil.

As a Catholic, mother, teacher, and activist, Marguerite “Maggy” Barankitse seems like so many of us. But when she was faced with a horrifically evil situation, she responded with rare, extraordinary heroism.

In 1993, Barankitse was in the midst of raising seven children in her homeland of Burundi, a small African country that borders Rwanda. A lifelong Catholic, she worked as the secretary to her bishop in the diocese of Ruyigi. Between working and caring for her family, Barankitse’s days were full — but her family’s peace was shattered when long-simmering ethnic tension erupted into a vicious, bloody massacre.

The Rwandan genocide is infamous around the world for how quickly it erupted, the brutality of the attacks, and the sheer scale of the violence. In the space of only three months, up to 1 million people of Tutsi heritage were cruelly slaughtered with rifles and machetes, and up to half a million women were sexually assaulted. In an especially nightmarish twist, it was often the Tutsis’ own neighbors, the Hutus—people they considered friends—who hurt and killed them.

The situation was somewhat reversed in Burundi, although no less horrific: Tutsis were the majority there, especially as Tutsi refugees from Rwanda poured over their borders, so the Tutsis in Burundi were hunting down local Hutus in retaliation for the situation in Rwanda.

That’s what happened one day when Barankitse was at the bishop’s manor. On October 24, 1993, a mob of armed Tutsis descended on the manor, where local Hutu families had taken refuge. Barankitse managed to hide the Hutu children, but the mob found their parents and killed them, one by one, while Barankitse was forced to watch. They beat and tortured her, trying to find out where the children were, but she refused to tell them.

“I tried to protect all the people, but they killed in front of me 72 people,” Barankitse explains, her voice breaking. Only one thing could sustain Barankitse through such horror: her Catholic faith.

“If I was not Christian, I must tell you, I [don’t know that I could have kept on living],” Barankitse said candidly, speaking English, which is not her native language. “Before Jesus died on the cross, He said, ‘Don’t be afraid. I be with you until the end of the world.’ This is what I was thinking of when I asked why they kill so many brothers and sisters. Where are you, God? Why you let them be killers? But I remember He died on a cross. When I want to despair, I remember He is always with me.”

That day changed Barankitse’s life forever. Twenty-five Hutu children had stayed hidden and survived the massacre, but were left orphaned. Who would care for them? Barankitse could not leave them abandoned. She hid the children in a nearby school and looked after them.

More and more children came to Barankitse, looking for a home after their parents were killed in the ongoing attacks. Soon it became her life’s work to build a safe harbor for all the children left behind. Some days she struggled to even feed the children, but she had faith God would care for them: “Even when I have nothing to feed my children, I pray to Our Father who will give me the daily bread,” she said.

And care for them He did. As more children came, she decided to start a non-governmental organization: Maison Shalom — the House of Peace. Her house was open to children of all ethnic origins, Tutsi, Hutu, and Twa — an act of radical courage in a time and place when ethnic origin could be a death sentence. The children called Barankitse “Oma,” meaning “grandmother” in German.

Maison Shalom greatly surpassed its origins as a shelter for orphans, becoming an immense force for good in the whole community, with Barankitse at the helm. “I began to see the problem was so deep. I don’t want to create an orphanage, but improve the whole community,” she said. “I began to create libraries, schools, a microfinance bank, a restaurant … I want to give the opportunity for kids to grow up in a strong community. A kid needs a family.”

Education, in particular, is her passion — perhaps because she worked as a schoolteacher before becoming the bishop’s secretary. She made education a cornerstone of the philosophy at Maison Shalom, and not just an academic education but education in virtue. She cited as inspiration these words from Nelson Mandela: “Education is the most powerful weapon which you can use to change the world.”

“If we can give good education with human values, Africa will become a paradise,” she said. “But the problem is we put schools there, and universities, but at the same time we don’t give the human values. Who will lead a country without integrity, without compassion? It will become tyranny.”

This is a concern that parents around the world share: How do you choose the best education for your child? How do you form them in virtue? Schooling is a big piece of the puzzle, Barankitse says: “It is very important we try to send our children to good schools, and again, schools with those human values, even in Western countries.”

Maison Shalom continued to grow, meeting a profound need in the local community. For years, right after the genocide, it was one of the few places in Burundi where Hutus and Tutsis cohabited in harmony. Since it opened, over 20,000 young people have benefited from Maison Shalom. The organization grew to a grand scale: At one point it employed more than 270 people, including nurses, psychologists, and educators for the children.

Her work took a drastic turn in recent years, however, when Barankitse took part in a peaceful protest against the Burundi president in 2015. His administration did not take kindly to that, and after threats were made against her life, she fled to Rwanda—herself a refugee like the many she had helped. Barankitse is tireless in her efforts, however, and  quickly opened a branch of Maison Shalom in Rwanda. In 2016, she was awarded the Aurora Prize for Awakening Humanity, which gave her $1 million to assist her humanitarian efforts.

As she continues her mission, Barankitse is confident in God’s providence, knowing that all she does comes from Him: “It’s not my work,” she said. “I am sure Maison Shalom is a message coming from God. He gives us one commandment: ‘Love each other, like I love you.’ We can’t live alone and be indifferent. We have to be the builders of hope.”

Building hope, strengthening the community—this has been her life’s work. If there’s one message she hopes other people will learn from her life, it’s to find their own way to contribute to this work, wherever they are in the world.

“With God, we can transform this world into paradise,” she said. “This is the sublime vocation—to love, to have compassion, to distribute happiness. Let’s build a world we can live in as brothers and sisters.”

Read more:
Inspired by St. Francis, this renowned American doctor works in one of the most remote places in the world

Read more:
In Nigeria, the largest statue of Jesus in all Africa stands almost 9 meters tall