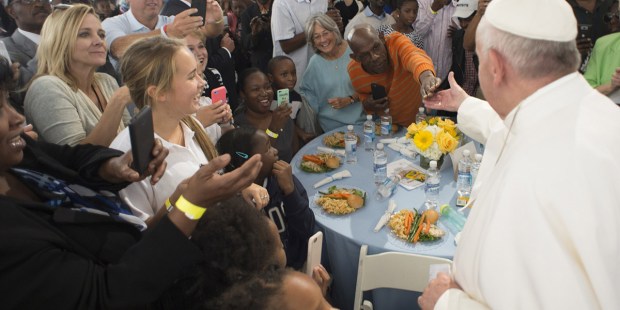 The Pontifical Council for Promoting the New Evangelization announced that for the 3rd World Day of the Poor, which will be November 17 this year, the Vatican will have a free walk-in medical clinic in St. Peter’s Square.

From 8am to 10pm from November 10 to November 17, doctors and nurses will be available for free medical attention for the poor.

Pope Francis will preside over Mass in St. Peter’s Basilica on November 17. Afterwards, he will have lunch in Paul VI hall with some 1,500 of the underprivileged from Rome and throughout the Lazio region.

For his message for this World Day, the pope made his own the lament of the Psalmist, but also offered words of encouragement:

At times, very little is needed to restore hope. It is enough to stop for a moment, smile and listen. For once, let us set statistics aside: the poor are not statistics to cite when boasting of our works and projects. The poor are persons to be encountered; they are lonely, young and old, to be invited to our homes to share a meal; men women and children who look for a friendly word. The poor save us because they enable us to encounter the face of Jesus Christ.

Here is more of his reflection on the way that the poor are robbed “even of their poverty”:

How many times do we see poor people rummaging through garbage bins to retrieve what others have discarded as superfluous, in the hope of finding something to live on or to wear! They themselves become part of a human garbage bin; they are treated as refuse, without the slightest sense of guilt on the part of those who are complicit in this scandal. Frequently judged parasites on society, the poor are not even forgiven their poverty. Judgment is always around the corner. They are not allowed to be timid or discouraged; they are seen as a threat or simply useless, simply because they are poor.

To make matters worse, they can see no end to the tunnel of extreme poverty. We have come to the point of devising a hostile architecture aimed at ridding the streets of their presence, the last places left to them. They roam from one end of the city to the other in the hope of getting a job, a home, a sign of affection… The least offer becomes a ray of light; yet even where justice might be expected to prevail, they meet with violence and abuse. Forced to work endless hours under a burning sun to gather seasonal fruits, they receive ridiculously low pay. They labour in unsafe and inhuman conditions that prevent them from feeling on a par with others. They lack unemployment compensation, benefits, or even provision for sickness.

The Psalmist describes with brutal realism the attitude of the rich who rob the poor: “They lie in wait that they may seize the poor… and drag them off in their net” (cf. Ps 10:9). As in a hunt, the poor are trapped, captured and enslaved. As a result, many of them become disheartened, hardened and anxious only to drop out of sight. In a word, we see before us a multitude of poor people often maligned and barely tolerated. They become for all effects invisible and their voice is no longer heard or heeded in society. Men and women who are increasingly strangers amid our houses and outcasts in our neighborhoods.