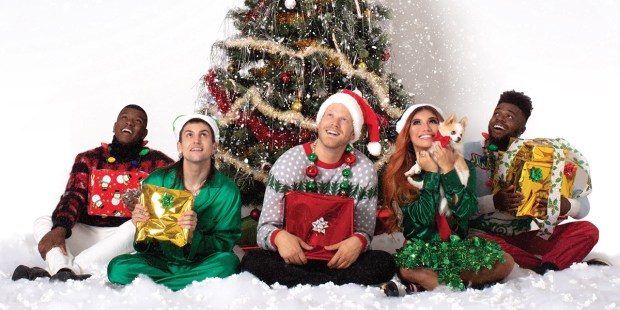 Time to make room in your Christmas music catalogue.

Christmas is right around the corner, and you may have noticed that some of the stores have already switched to their holiday playlists. This year,a bunch of great Christmas albums have been released by a wide range of artists to suit just about every musical palate!

Christmas is the one time of year where every artist, secular or religious, crosses over to the Christian genre to celebrate the birth of Christ. 2019’s releases come from some veteran songwriters as well as a few new faces to the musical scene, each providing a new take on Christmas classics with even a few original Christmas compositions thrown into the mix.

Whether you’re driving around to shop for your loved ones, wrapping presents, or even just hanging out by the fireside admiring the Christmas tree, these albums will set the perfect atmosphere for your Christmas season. Without further ado, lets take a look at some of the best Christmas albums of 2019.

It’s hard to believe it, but Mariah Carey’s “All I Want For Christmas” is 25 years old! To celebrate the anniversary, Mariah has released a new deluxe edition of her monumentally successful Merry Christmas album. The record features a series of live recordings taken from a concert she gave at the Cathedral of St. John The Divine.

These days, no Christmas music list is complete without Pentatonix, the a cappella group that has been releasing a steady stream of Christmas music since its inception. This year, Pentatonix has pulled all their most popular Christmas tunes into one album, so you won’t need to keep five different CDs in your car to hear them all!

If you’re not familiar with Idina Menzel, there’s a good chance you already know her voice from the hit Disney film Frozen, in which she played Elsa, or from her signature casting as Elphaba in the musical Wicked. Before reprising Elsa in the upcoming Frozen II, Menzel released this Christmas album full of seasonal holiday songs and some Broadway hits that fit the season.

John Legend adorns the cover of his new holiday release sporting a look that says, “Yeah! I know it’s a great pun!” His smooth voice takes us through some Christmas classics and more than a few brand new Christmas tunes that are sure to become classics. One of our favorites is “Bring Me Love,” which is so peppy that it could have been a Tom Jones tune.

5 – Celtic Woman – The Magic of Christmas

Bringing the sounds of Christmas straight from Ireland, Celtic Woman produced this marvelous album that has immediately made it to the top of our Christmas list. Their voices are warm and the instruments are hot in this folk fueled record. Our favorite is their “O Come O Come Emmanuel,” which is accented by a brilliant set of Uilleann pipes to add that touch of Celtic inspiration that the tune always needed.

6 – The Singing Contractors – Building a Christmas to Remember

The Singing Contractors are a brand new face to the Christmas music scene. Literally starting off as independent contractors who enjoyed singing together while they worked, they produced this Christmas album that’s simply splendid. They infuse some of the greatest Christmas classics with some country-style rock, with a touch of bluegrass. The harmonies between these two large-voiced men are where they really shine.

7 – Lea Michele – Christmas in the City

Lea Michele got her start as a child actress on Broadway, but now she’s blowing us away with her new Christmas album. This is a more classic take on Christmas. Lea doesn’t take risks with changing up genre, but it doesn’t matter because her vocal is so exceptional that it’s bound to be a success. Michele realized that all people really want for Christmas is to feel the way they did when they were kids, and she doesn’t disappoint.

Looking for some instrumental Christmas music? Is Kenny G starting to feel stale? Well, you’re in luck! Dave Koz is taking back jazz saxophone driven Christmas music with his new album. Koz has been one of the world’s most respected saxophonists for several decades now, and his new album proves his chops. The new record is a lot of fun and a must listen for Chirstmas 2019.

The Collingsworth Family believes wholeheartedly that a family should be together for Christmas. Putting their belief into practice, they produced this old-fashioned gospel Christmas album. Our favorite track is “The Story of the First Christmas Medley” where they bring together all the hymns about the Nativity to tell the story of Christ’s birth. Full of family values and some wonderful arrangements, A True Family Christmas will be in the mix for many years to come.