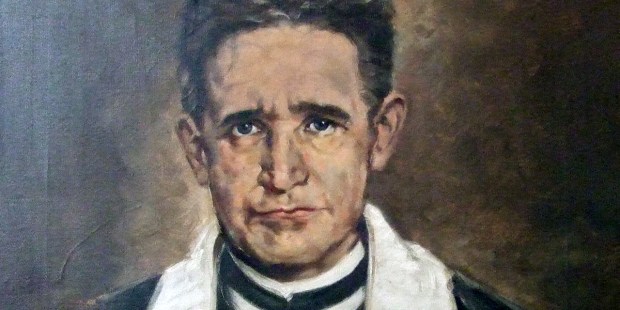 Bl. Rupert Mayer charged into the heat of battle to pray with soldiers and give them the Last Rites.

Bl. Rupert Mayer was always in the line of fire, even before he volunteered to be a chaplain during World War I.

According to St. John Paul II, during his homily for the beatification of Mayer, “When Rupert Mayer decided to enter the Society of Jesus in 1900 as a young priest, the Jesuits were still officially regarded as ‘enemies of the Reich,’ who were expelled and forbidden by the law of the country.” Instead of discouraging Mayer from becoming priest and serving in Germany, it strengthened him and gave him even more reason to minister in the country.

In 1914, Mayer volunteered as a chaplain, initially serving in a military hospital. However, it didn’t take long for Mayer to request to be sent to the front lines to minister to the spiritual needs of the soldiers in battle.

He took his job seriously and freely went unarmed into the trenches. Mayer would crawl on the ground from solider to soldier, administering the sacraments and offering counsel in the midst of the bloodshed. He lost his leg in a grenade attack and was then known as the “limping priest.” In 1915 Germany awarded Mayer the “Iron Cross” for bravery and was the first chaplain to receive such an honor.

When Hitler rose to power, Mayer preached against his many heinous activities and the Gestapo warned Mayer to keep quiet. This didn’t deter him and as a result, he was imprisoned several times and spent time in a concentration camp.

He even welcomed this cross, noting on a questionnaire “which he had to fill out in prison: ‘I am by no means dissatisfied with this lot: I do not consider it a shame, but the coronation of my life.'”

St. John Paul II pointed to his life as an example for everyone, encouraging us to “put on the armor of God” and to fight bravely for truth, beauty and goodness.

Blessed Rupert Mayer is an example and a call for all of us to lead a holy life. Holiness is not a matter for some chosen souls: we are all called to holiness, all without exception. And he also tells us what belongs to a holy life: “No extraordinary work, no extraordinary religious experiences, no apparitions. Only: Heroic Virtue.”

The simple yet profound holiness of Mayer remains a beacon for us, showing us the way to live fearlessly our Christian faith, no matter what “bullets” may be whizzing by our head.