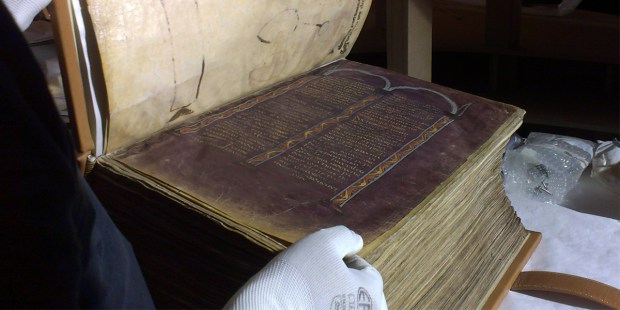 It is also considered to be the most accurate copy of St. Jerome’s original translation.

Although we do not know much about St. Ceolfrid, we know at least a few key things: we know for sure he was the Anglo-Saxon abbot of St. Paul’s Monastery in England, we know he was French, and we know that he was the warden of Bede the Venerable. Also, we know he commissioned three copies of the Bible somewhere in the late 7th century. One of these three copies is the invaluable Codex Amiatinus, the earliest surviving copy of St. Jerome’s 4th-century translation of both the Hebrew and the Greek Bibles (that is, both the Old and New Testaments) into Latin. This translation is what we know as the Vulgate.

The Codex Amiatinus is considered the most accurate copy of St. Jerome’s original translation. In fact, this is the copy that was was used in the revision of the Vulgate by Pope Sixtus V in the late 16th century. It is currently preserved in the Medicea Laurenziana in Florence, and is considered one of the most valuable Christian manuscripts in the West.

Read more:
This monk helped save ancient manuscripts from ISIS

What we know of Ceolfrid, in fact, we get from Bede’s own Ecclesiastical History of England. In it, he states the Benedictine monk Ceolfrid commissioned three large Bibles from the abbey’s scriptorium. Two of these copies were placed in each of the twin churches of the monastery (in Wearmouth and Jarrow), and the third of which was intended as a gift for the pope. These Bibles were copied from another codex, the Codex Grandior, which is now lost. But of the three texts, only the copy that later came to be known as the Codex Amiatinus survives.

Completed by seven different scribes, it was presented to Pope Gregory II by associates of Ceolfrid, who died on his way to Rome in 716.

The manuscript is so rich in Byzantine influences that for a long time it was considered to be Italo-Byzantine (as if it had been produced in Ravenna) rather than of English origin.