Satan is jealous of us because of the Incarnation, says pope 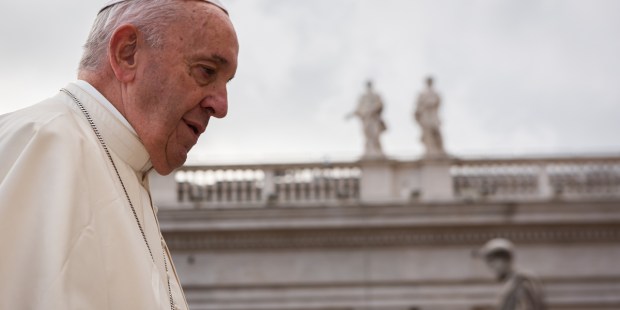 In Satan’s envy, we find the root of political mudslinging, as well as the sin in my soul and in yours …

The devil is out to sow hatred and division because he is jealous of mankind and the fact that Jesus Christ became one of us, said Pope Francis during his morning homily in the Casa Santa Marta.

Drawing from the First Reading, which says that through the devil’s envy, death entered the world, the pope spoke of how the devil set out to destroy humanity so that we cannot live as brothers and sisters.

We are fighting a war inside ourselves, continued Pope Francis, and we have done so from the beginning. “Cain and Abel were brothers,” he said, “but the jealousy and the envy of the one destroyed the other.”

This is the way it is, said the pope; just watch the evening news: “wars, destruction, people dying of illnesses caused by wars.”

Someone touches your heart to lead you down the wrong road. Someone sows destruction and hatred in our hearts. Today we have to say it clearly, there are many who sow hatred in the world, who destroy.

Francis said he often feels the news is just a story of hatred and destruction, wars and terrorism.

“So many children die of hunger and disease” because they have no water, no education, or healthcare, said the pope. Instead, “the money needed for this goes to manufacturing weapons of destruction.” This is what happens in the world, but also “in my soul and in yours,” he continued, because of the devil’s envy and hatred. “And why is the devil envious?” asked the Pope: he is envious “of our human nature.”

Do you know why? Because the Son of God became one of us. The devil cannot bear that.

That is why he destroys, said Pope Francis, and that is “the root of the devil’s envy, the root of our evils, our temptations, it is the root of wars, hunger, of all the calamities in the world.”

Often one politician is tempted to sling mud at another, “to destroy the other,” using both lies and truth. This is not a healthy and clean political rivalry “for the good of the country.” Those kinds of politicians use insults to diminish opponents, afraid they may appear more competent.

I want all of us to think about this: Why is there so much hatred in the world today? In families that cannot be reconciled, in our neighborhood, in the workplace, in politics… The devil is the sower of hatred: “Death entered the world through the devil’s envy.”

Some say: but Father, the devil does not exist, it is evil, such an ethereal evil… But God’s Word is clear. The devil got angry with Jesus. Read the Gospel: it’s clear, whether we have faith or not.

Pope Francis concluded praying that God “may make our hearts grow in faith in Jesus Christ, His Son,” who assumed our human nature, “to fight with our flesh and to be victorious in our flesh” over the devil and evil. May this faith “give us the strength not to play the game of the envious one, the great liar, the sower of hatred.”