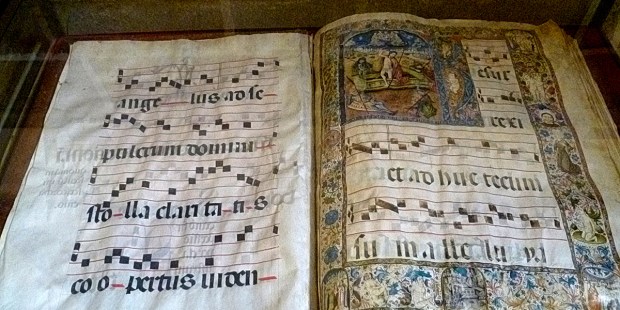 The old plainchant system was easy to read, even for the short-sighted singer.

Singing from the same hymn sheet is a figure of speech that had more meaning during the Middle Ages. At that time, the people doing the singing were members of the choir. It was a serious religious duty rather than an excuse for belting out a favorite song. Choristers in monasteries and churches needed to get it right. As song sheets were made of parchment – and very rarely paper – they were extremely expensive. Members of the choir had to sing from the same sheet, literally. This required a very large page.

Many choir books are more than three feet tall. Also making life easier for those using the page was the way that notes were written. Simpler than modern musical notation, medieval musicians used only four lines rather than the five we are used to nowadays. There are none of the complexities that ranged from breves to demisemiquavers. The old plainchant system was easy to read, even for short-sighted singers.

Thanks to the choir books, we understand medieval Christian music much better than, for example, ancient Greek or Roman notation. Scores from the classical world are almost non-existent despite the huge number of writers engaged in musical criticism at the time. Of those few scores that have survived from the ancient world, the performance is seldom a happy experience for modern listeners. The use of quarter tones creates an obstacle, although recent research at Jesus College, Oxford University, has provided a breakthrough in listening pleasure with re-created instruments and melodies. Medieval plainchant, on the other hand, consistently sounds as serene and spiritual today as it did a thousand years ago. It has been a continuous tradition in those places where the Reformation didn’t destroy it. These days it is no longer sung from the same choir book.