Listen to the ‘Dum Pater Familias,’ a hymn from a 12th-century pilgrim guide 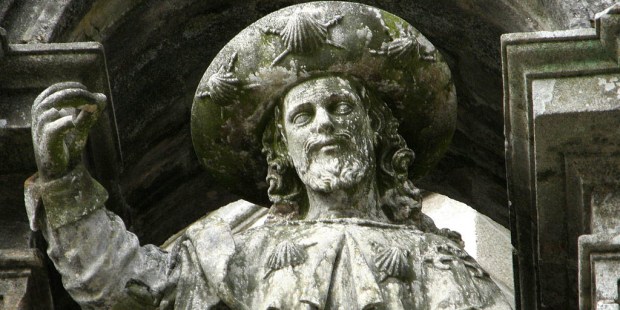 The Dum Pater Familias is an old Roman chant pilgrims sing on the Camino de Santiago. This pilgrimage route  originated in the 9th century, and the chant can be found as early as in the 12th century, in the famous Codex Calixtinus, a pseudepigraph attributed to Pope Callixtus II, which includes advice for pilgrims following the Way of St. James all the way to the Cathedral in Compostela.

In fact, the fifth book of the Codex is basically a travel guide, but its previous chapters are abundant with hagiographical details regarding the life and legends built around St. James (in fact, it abundantly paraphrases the original Liber Sancti Iacobi), and it even includes polyphonic musical pieces — among them, the one featured in the video below, the Dum Pater Familias.

God, Father of all mankind, King, ruler of the world
Gave to his apostles dear,
lands, each to their own just care
James in his own land of Spain,
Shines out with a holy flame
First [to be martyred] amongst Apostles now!
Martyred at Jerusalem!
James became the holiest
by illustrious martyrdom!
Lo! James’s Galicia calls out for our pious toil,
Marching on the holy way, road over her glorious soil.
Blending all our prayers in one harmony of endless song:

To Lord St. James! To God’s St. James!
And onward! And upward! God speed our way!