The hidden power of homemaking 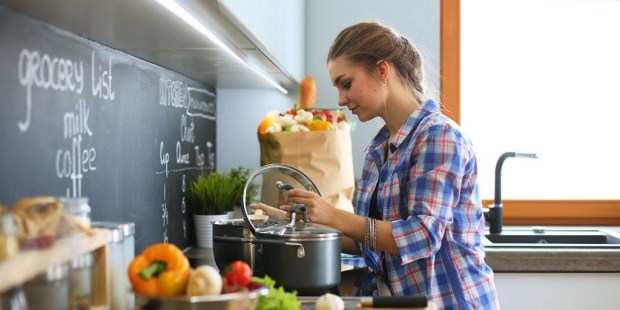 A new book encourages women to celebrate their talent for making life beautiful.

Homemaking is a powerful economic force—the average American spends almost 40% of his or her budget on housing and products for the home. Yet it’s all too easy to forget the profound spiritual meaning behind the elemental concept of home.

“We want our homes to be a sanctuary, but also a foreshadowing of heaven. We want to get home with the Father in heaven,” said Carrie Gress, creator of the Theology of Home website with Noelle Mering.

Gress, Mering, and Megan Schrieber have just published a book with the same name, Theology of Home, and it’s a gorgeous, lushly photographed treasure that belongs on every Catholic woman’s coffee table. The book expands on the work they’ve done on their site, encouraging readers to take seriously the transformative power of home—and of the women who make it what it is.

A place of evangelization

“If you look at the history of the Church, women have been this stealth evangelical force that we don’t pay enough attention to,” Gress said. “We think of evangelization as apologetics, but we don’t think enough about what happens when women open their hearts to others.”

This kind of evangelization need not be anything formal or elaborate. Whether it’s a potluck dinner or dessert and drinks after the kids are in bed, extending an invitation can make a real difference in someone’s life.

“We can’t always get someone to church, but we can get them over for a party or for dinner,” Gress said. “That can be a meaningful witness, seeing the faith lived in a family. That speaks to people much more deeply than fine china or the perfect floral arrangement.”

Indeed, inviting someone into a Catholic home is inviting them to church — the ecclesia domestica or domestic church, that the Church calls all Catholic families to be.

Despite how important it is to make a lovely, welcoming home—both as a gift to ourselves and our families, and as a way to welcome others into the domestic church—too often this role has been written off as unimportant. The denigration of homemaking isn’t just a problem in the secular world, but even in Catholic circles. Decorating, meal planning, cleaning, and all the myriad connecting parts that go into making a home sometimes are considered unworthy of attention from serious minds.

“I would love to see more women be inspired to create books, articles, magazines, and other initiatives like this,” Gress said. “Catholics have just dipped our toes into pop culture. We can be too intellectual in Catholic culture; we have these great intellectual arguments but not a popular way to disseminate them.”

Gress has spent time researching how ideas spread through the culture and when you look at that, she said, “it wasn’t done by women reading Karl Marx or Margaret Sanger, but through magazines, pop culture, daytime TV, the media. We as a Church haven’t found a great way to combat that.”

The print format is especially important in fulfilling this mission. “Why are magazines still in print? Women love what’s visual,” Gress said. “We love to sit down and read stuff in print. We need to go on the offense as Catholics. People don’t encounter the beauty of Catholic belief very much in the culture, so when they see it, it really grabs them.”

“The word homemaker isn’t a dirty word. It’s an incredible opportunity that we have to give to others, not just on a material level but on a spiritual level,” Gress said.

Above all, this book is not about telling women how they should or shouldn’t organize their lives and homes: It’s about celebrating all that they already do right. Catholic women have a lot to be proud of, Gress said, in the incredible work they do for the Church and the world.

“I want Catholic women to know they’re doing amazing, and they are the ones that have the capacity to transform the culture,” Gress said. “I don’t think we are reminded of that enough.”

Sometimes the act of hospitality, however simple, may demand a great deal of us. Gress described seasons of life, such as with many small children in a small home, or after moves or during illnesses, when entertaining guests may happen far less often.

“We went through a long phase where I didn’t entertain. I felt like I had to move heaven and earth to get the house ready for company,” she said. Yet when she did find small ways to open up her home to others, in spite of the imperfections she perceived, it was always worth it.

“Hospitality really is a gift to others. At times I felt that I didn’t have the perfect party house, but then I would look around and see how much fun everyone was having, and realize that it was working,” she said.

Ultimately homemaking is a meaningful role for women to embrace. Taking time to arrange flowers or to plan a dinner party on a budget may seem trivial, yet these acts can have eternal consequences. Each guest we invite to our home offers the chance to serve another person as we would serve Christ.

“Everyday acts like having someone over and just listening to them, taking a family a meal after a new baby, teaching our children throughout the day—this is powerful evangelization,” Gress said. “Our culture is hungry for this ability women have to make others feel heard and cared for. I think we’ve forgotten the power a woman has in her home to reach the hearts of others.”

Read more:
How to host a party for millennials