Meet the priest who treated alcoholism with chalk 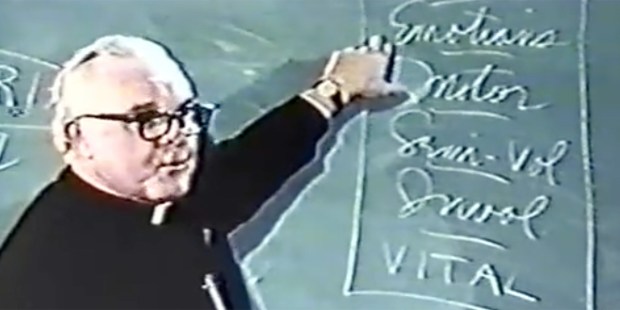 Fr. Joseph Martin had a way with words, and used them to treat fellow alcoholics.

Fulton Sheen became famous writing on a chalkboard in front of a huge television audience. Fr. Joseph Martin, not so much.

But Fr. Martin may have helped as many people find salvation as Bishop Sheen did.

While the famous TV evangelist focused on the basic truths of the Catholic faith, helping to spread the Gospel in his own way, Fr. Martin focused on the truths of one particular evil, alcoholism, and helped spread the salvation of sobriety. And his missionary work began when he picked up a piece of chalk in front of a small audience in Maryland. Although he’s been dead for 10 years, his work lives on in a treatment center that was once called Father Martin’s Ashley.

When he died at the age of 84 in March of 2009, the New York Times called him a “national leader in the fight” against alcoholism.

The center he founded, near Havre de Grace, Maryland, was sometimes called “the Betty Ford Clinic of the East,” the Times said, referring to the former First Lady, who also struggled with alcoholism and initiated a treatment center. At the time of Fr. Martin’s death, Father Martin’s Ashley had helped more than 40,000 people, including several celebrities, said the newspaper. It has since been renamed simply Ashley.

Fr. Martin, himself a recovering alcoholic, first became widely known through a talk he gave on the 12 steps of recovery propounded by Alcoholics Anonymous, the Times said. “With no preaching or moralizing, he spoke plainly of alcoholism as a sickness, not an evil,” said the newspaper. “He used a blackboard and chalk, and in 1972, the Navy filmed the speech to use for mandatory addiction training, titling the movie ‘The Blackboard Talk.’ The speech came to be known as ‘the chalk talk,’ and subsequent videos of it and more than 40 more talks that Father Martin made were used in other branches of the military and throughout the federal government as well as in hospitals, corporations and treatment centers around the world. He wrote three books.”

“We alcoholics drink because we can’t not drink,” Fr. Martin declared in his talks. His motto was “Have chalk, will travel.”

Even Betty Ford, while she herself was in treatment, wrote to Fr. Martin to thank him for his words of wisdom.

Born in Baltimore in 1924, Fr. Martin was exposed to alcohol and its abuse early on. His father got drunk on Fridays, which was payday. But Joseph Martin showed much promise as a student at Baltimore’s Loyola High School, and after attending Loyola College went on to study for the priesthood at St. Mary’s Seminary in Baltimore. He was ordained a priest of the Society of St. Sulpice in 1948.

He taught in seminaries in California and Maryland, but in time, his drinking prompted his superiors to send him to Guest House, a Michigan treatment center for the clergy.

It was a chance meeting Fr. Martin had in the 1960s with a woman from Havre de Grace that led to the founding of the treatment center. Lora Mae Abraham, who was struggling with alcohol addiction, went to Johns Hopkins University in Baltimore to hear the then-governor of Iowa speak about his own recovery. The governor couldn’t make it, and Fr. Martin filled in for him.

“He removed the shame from me,” Abraham told the Baltimore Sun in 2008. “It changed my life forever on.”

Though Fr. Martin worked for years with Maryland’s alcoholism agency, Abraham urged him to do more. In 1978, they began raising money to open Ashley, a treatment center named for her father, the Rev. Arthur Ashley.

In the meantime, the Navy filmed one of his talks in front of the blackboard, which Fr. Martin gave from “some notes I’d taken because of my own recovery.”

“Chalk Talk” became a “classic in treatment programs around the country,” according to the Los Angeles Times. “By the end of his life, Martin had more than 40 motivational films to his credit.”

Martin was invited by Pope John Paul II in 1991 to participate in the Vatican’s International Conference on Drugs and Alcohol, the LA Times noted. He traveled widely around the world, including visits to Russia to speak at Alcoholics Anonymous groups and to teach addiction counselors.

If you have an hour or so, you can get an idea of Fr. Martin’s style with this video of his “Chalk Talk.”