Vietnam has its own Notre Dame, which serves six million Catholics 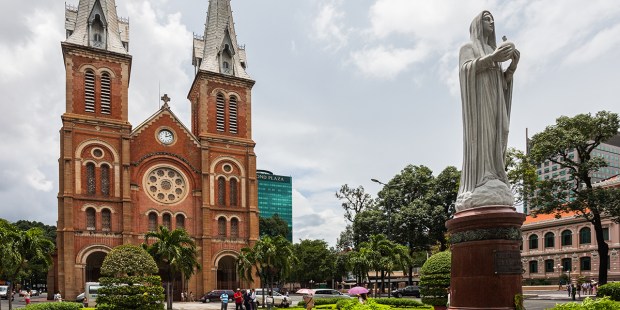 Built in 1880, the Notre-Dame Cathedral Basilica of Saigon is a testament to the importance of Catholicism in Vietnam.

The name Notre Dame immediately evokes the image of Paris’ most famous Catholic landmark. But to Vietnam’s six million Catholics, Notre Dame is the name of the country’s most important place of worship. Built between 1863 and 1880 by French missionaries, the Notre-Dame Cathedral Basilica of Saigon is a testament to the importance of Catholicism in Vietnam.

The Catholic Church first established a community in the city of Saigon, now known as Ho Chi Minh City, after the French took control of Saigon and its surrounding territories in 1859. A few years later, the Church decided to build a place of worship to serve the expanding French community in Saigon.

Admiral J. Bonard was awarded the bid for the construction of Vietnam’s first Catholic church in 1863. Initially, Bonard opted for a simple wooden structure. But 10 years after its construction, “Saigon Church,” as Vietnam’s first church was called, proved vulnerable to termites and to Saigon’s humid weather. The French admiral eventually ordered the demolition of the wooden church and decided to redesign it featuring some elements of the famous Notre Dame Cathedral of Paris.

It took three years to complete the first phase of the church, with its official opening held on Easter Day 1880 in the presence of the French Governor Charles Le Myre de Vilers. Most building materials, including tiles, red bricks, stained glass and bronze bells, were transported to Saigon from France. Bricks were sourced from the city of Toulouse, tiles came from Marseille, while stained glass was produced in Chartres, the French city famous for its stunning cathedral.

One of the last additions came in 1959 when Bishop Joseph Pham Van Thien ordered the shipment of a beautiful granite statue of the Virgin Mary directly from Rome. The statue was installed on February 16, 1959, and has become one of the highlights of the church ever since. Just three years later, in 1962, Pope John XXIII officially declared “Notre Dame of Saigon” a basilica.

Today, the Cathedral is one of the most visited sights in Ho Chi Minh City. Many of Vietnam’s growing Catholic population, representing 7% of the entire Vietnamese population, make the trip at least once in their lifetime. And thousands of foreign visitors flock to the “Notre Dame of the East” to learn about Vietnam’s Catholic history.

Since 2017 the Notre-Dame Cathedral Basilica of Saigon has been undergoing intense restoration work that will be completed in 2020. Visitors will need to wait for a few more months to fully access the beauty of Saigon’s most famous Catholic landmark. In the meantime, believers are welcome to join locals for Mass held every Sunday at at 9:30 a.m. in both Vietnamese and English.