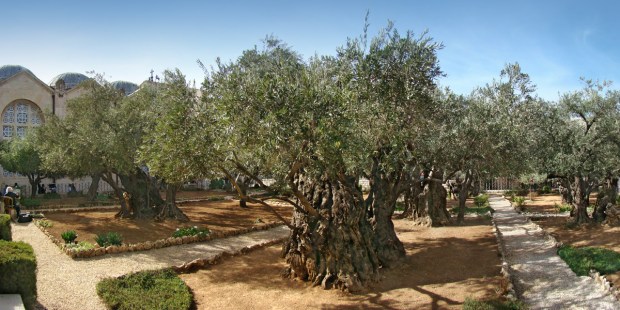 Because of the nature of these plants, they could be the same ones that surrounded Jesus during his Agony in the Garden.

The Garden of Gethsemane, where Jesus prayed to his Father during his Passion, has recently come back into the spotlight after a study of the olive trees in the area found them to be upwards of 900 years old.

The Jerusalem Post reports that experts were able to determine that the olive trees were at least 900 years old, but because of the nature of the plant it is hard to determine if they are older. It is even possible that the trees that stand in the garden today are the same trees that surrounded Jesus during his Agony in the Garden.

There are eight trees large trees in the garden, but unfortunately five of these were so gnarled that they have become hollowed and were unable to be dated. Carbon dating of the remaining three trees placed their dates at 1092, 1166 and 1198.

During a presentation of the results of the study given at the Vatican, chief researcher Professor Antonio Cimato noted:

“We cannot rule out the possibility that there was an intervention to rejuvenate them when they stopped being productive or dried out.” He added, “But let me say: plants of greater age than our olives are not cited in the scientific literature. Our olives are among the oldest broad-leaved trees in the world.”

If such a rejuvenation took place then it is possible that the eight olive trees may indeed remain from biblical times. Olive trees have the capability to regrow from just their roots, which means that even if the trunks and branches are not the same, the trees may have developed from their biblical roots, so to speak.

An examination of the DNA of these plants has shown that they share the same parent plant. This could mean that, during rejuvenation, one healthy tree was used to propagate the others. However, it is also possible that the ancient olive growers of Jerusalem used plant cutting as way to create new olive trees, rather than seeding for fresh plants.

In any case, Pierbattista Pizzaballa, a Custodian of the Holy Land who maintains the site, suggested the age of the trees is irrelevant compared to the cultural and religious significance of the site. He said:

“The question is not if these are the very trees, but if this is the place referred to in the gospels. And it is the place, of that there is no doubt.”