How St. Margaret led her wayward husband back to the Church 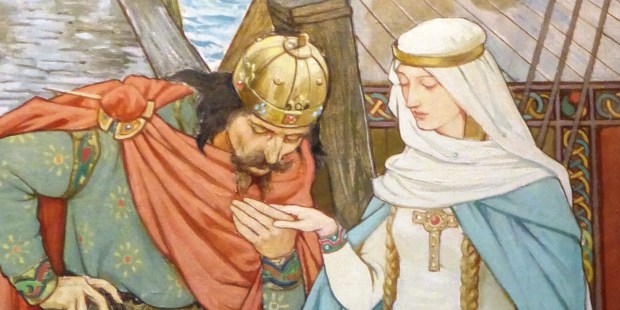 If you are married to someone who doesn’t share your faith, take note of St. Margaret’s example.

Often when a young couple gets married, one person is more invested in the Christian faith than the other. This isn’t always a problem at the beginning of marriage, but eventually it can present many issues, especially if one attends Mass on Sunday regularly, but the other likes to stay at home. Tension will likely build and can cause unhealthy feelings toward your spouse.

St. Margaret of Scotland fully understands such a situation.

Her royal family had to flee her native country, and they ended up in Scotland, finding a safe haven under the protection of King Malcolm III.

Malcolm fell in love with Margaret and the two were soon married. Margaret came from a devout family and she was deeply committed to her Catholic faith.

Initially Malcolm simply let Margaret “do her thing,” and wasn’t too interested in being a faithful Catholic. He had many matters to attend to in his kingdom and didn’t bother about “religious things.”

However, Margaret’s gentle influence began to soften the heart of Malcolm. According to a biography of St. Margaret written shortly after her death, “by the help of God she made him most attentive to the works of justice, mercy, almsgiving.”

Furthermore, “From her he learnt how to keep the vigils of the night in constant prayer; she instructed him by her exhortation and example how to pray to God with groanings from the heart.”

St. Margaret would read the Bible to Malcolm, for he could not read, and he subsequently had a great interest in all the holy books that his wife used.

Whatever she refused, he refused also; whatever pleased her, he also loved for the love of her. Hence it was that, although he could not read, he would turn over and examine books which she used either for her devotions or her study; and whenever he heard her express especial liking for a particular book, he also would look at it with special interest, kissing it, and often taking it into his hands. Sometimes he sent for a worker in precious metals, whom he commanded to ornament that volume with gold and gems, and when the work was finished, the king himself used to carry the book to the queen as a loving proof of his devotion.

While Malcolm didn’t ascend the heights of sanctity as did St. Margaret, he did renounce his former ways of living and tried to be a just king.

The story of St. Margaret reminds us that sometimes all we need to do to influence a spouse is live our faith authentically. We need not force our spouse to become Catholic or go to Mass with us, but simply show that person the beauty of the faith through our actions and words.

If you need some heavenly help, pray to St. Margaret of Scotland and ask her to guide you as you strive to bring unity to your marriage’s practice of Christianity.

Read more:
12 Saints who were married

Read more:
Love at first sight: The sweet story of how Sts. Louis and Zelie Martin fell in love