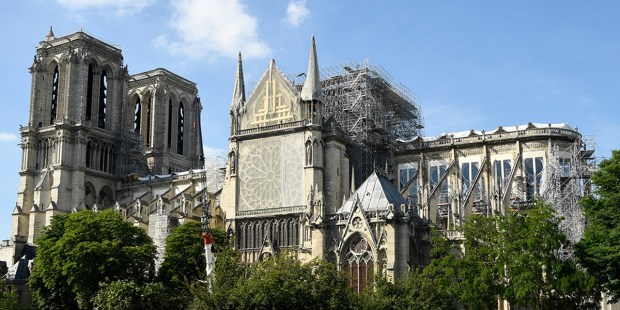 Official in charge of reconstruction favors an updated redesign, while the architect plans an identical restoration.

It’s been seven months since fire destroyed the roof of Paris’ Cathedral of Notre Dame. But temperatures are rising in disputes about how to rebuild the fabled church.

A very public, and some would say ugly, dispute erupted last week when Army General Jean-Louis Georgelin, who was appointed by French President Emmanuel Macron to oversee reconstruction, suggested that Notre Dame’s chief architect “shut his mouth” in regard to plans for restoring the cathedral’s iconic spire.

Macron has said he is in favor of adding a “contemporary” touch to the spire, which fell during the blaze.

The chief architect, Philippe Villeneuve, insists the tower must be redone exactly as it was before, Radio France International reported:

Tensions boiled over into an open squabble at a meeting of the cultural affairs committee of the National Assembly—the lower house of parliament—late Wednesday.

“As for the chief architect, I have already explained that he should shut his mouth,” Georgelin erupted, to gasps of astonishment from those present at the meeting.

Georgelin suggested that “we move ahead in wisdom so that we can serenely make the best choice for Notre Dame, for Paris, for the world,” RFI reported. He said the final decision would be made in 2021, and also confirmed the five-year timeframe set by Macron for rebuilding the church, in time for the 2024 Olympic Games in Paris.

For his part, Villeneuve has said that target could only be met if the Gothic spire is rebuilt to resemble its former self.

“Either I restore it identically, it will be me,” he said last month, “or they make a contemporary spire and it will be someone else.”

Last month, the culture ministry said nearly one billion euros ($1.1 billion) had been pledged or raised for the reconstruction of the 850-year-old church.

“The phase of securing the edifice is not over. It will be done when the scaffolding around the spire has been dismantled,” he said, and warned of winter gales threatening to “destabilize” the temporary, protective structure.