Find a friend, be a friend: Inspiring Catholic quotes 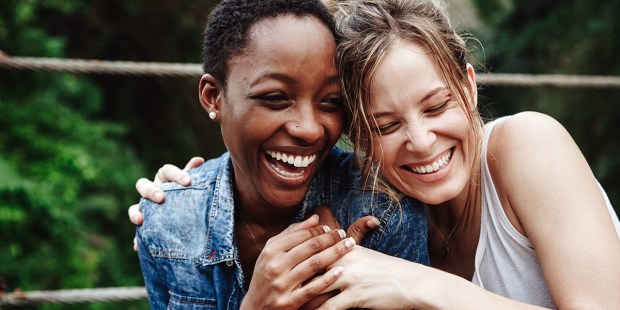 A Notre Dame conference on friendship left us a whole lot to think about ….

What makes a true friend and where can you find one?

Those questions lingered in the air at a recent Notre Dame conference examining wisdom — ancient and new — about the meaning of friendship.

Catholics are called to “renew the discipline of friendship,” said Philadelphia’s Ukranian Bishop Boris Gudziak in his opening remarks. For Christians, there is no more important question than: “Can you love?”

Here are some thoughts on how to do so from the Notre Dame Center for Ethics and Culture.

Friendship is a topic that has fascinated mankind from Cicero and Aristotle to today’s leading philosophers such as Alasdair MacIntyre, who has spoken at all 20 of the Center’s conferences.

If a friendless person were to experience all the beauty and mystery of the universe, said Cicero, “there would be no pleasure for him in the awe-inspiring sight, which would have filled him with delight if he had had someone to whom he could describe what he had seen.”

Or, as MacIntyre put it, “Subtract friendship, and much of life would be colorless.”

Subtract friendship, and much of life would be colorless.

That’s why the modern crisis in friendship has disastrous consequences.

Loneliness drives the “deaths of despair” rising nationwide, as people numb emotional pain with opioids and alcohol, said the bishop.

It also leads people to sexualize their thirst for love, said writer Ron Belgau, who in 2013 spoke at Pope Francis’ Meeting With Families as a same-sex attracted but chaste Catholic.

“Friendship is less valued in our society, so most young people’s experience of emotional intimacy is a series of romantic/sexual relationships that are quasi-marital: sexual but non-committal,” he said.

How to find a friend? First, pray that one finds you.

“Good friendships,” said MacIntyre, “are not achievements but gifts.” That means that they aren’t the end result of networking, and they aren’t merely relationships of convenience, as when you are friends with someone because they play tennis with you or share your career.

“Friendship does not rest upon some calculation of cost and benefit,” he said. Friendship “lies beyond dessert as it lies beyond calculation. So it is with all genuine gifts.”

You can find a friend in your spouse — but shouldn’t stop there.

Margaret Monahan Hogan quoted St. Thomas Aquinas on the virtue of friendship in marriage. “The greater the friendship, the more solid and long-lasting the marriage will be, as we are ‘United not only in flesh but in domestic activity.’”

Nonetheless, human beings need friends outside their own house. “Find a home and get out of the house,” said Georgetown University’s John Carr. “Find a faith community where you feel at home, but don’t become closed in. Go out.”

Read more:
How St. Therese dealt with loneliness as a child

You can find friends online — if you go deep.

One refreshing aspect of the conference was the willingness of speakers to point out the positive effects digital media can have on friendship — and not just the negative.

“Social media can edify us, lead us to virtuous people and virtuous friendships, which ultimately lead us to God,” said Daughter of St. Paul Sister Theresa Aletheia Noble. She even said, “Media friendship is not necessarily less ideal than real-life friendship,” citing friendships that existed through letter-writing.

Pittsburgh priest Father Anthony Sciarappa agreed, saying, “The key to virtue on social media is to be deeply self-reflective, not divorced from our real person.”

To be a good friend, you have to be humble and open.

Don’t limit your friends to those who are the “best and brightest” or even to those who share all of your opinions, said several speakers.

“One needs to be open to friendship, wherever it might occur,” said MacIntyre. “Lack of openness may stem from pride. It is in fact pride that makes us too often ungrateful for gifts — even the gift of friendship.”

Friendship is the key to breaking tribal divides.

Associating only with those you agree with tends to “radicalize” your views, said Father Jordi Pujol of Rome’s Sante Croce University. “Friendship is the key to breaking tribal divides.”

But wherever you find it, friendship takes a lot of time.

“How many good friends should you have?” asked scholar Gilbert Meilaender. “Not a lot … a number you can spend time with on a nearly daily basis.”

Why? Because “to be close to people’s souls you have to do a lot of work,” said film director Whit Stilman.

This is, after all, what Jesus Christ did.

“Our faith, our theology, our very civilization is based around the claim that God has become friend with us,” said Bishop Boris. “Full immersion in the sweat, tears, and joys. … What a God! What a Lord!”

The ultimate goal for friendship is still the goal Jesus himself set: “To lay down one’s life for one’s friends.”

Read more:
Here’s how to go from the empty tomb to friendship with the Risen One