What women get wrong about being modest 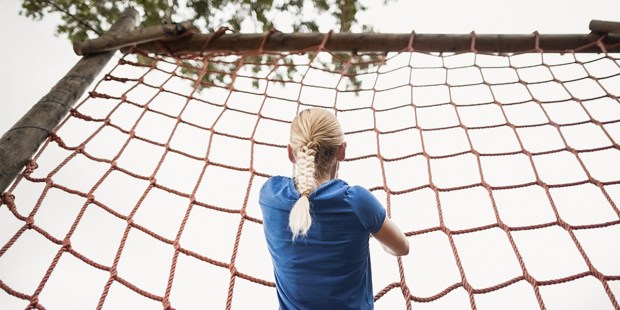 Downplaying accomplishments may seem like the virtuous thing to do, but it’s actually the opposite.

Last weekend I went to Austin to be a judge in a fitness competition for all ages. As a trainer, my job was to both judge and encourage the athletes on the event for which I was stationed –a cargo net climb.

The athletes had to climb up a cargo net, across it, and then back down the other side. If you’ve never climbed a cargo net you might be thinking it doesn’t sound so hard, but believe me, it is. The net is loose and the spaces between the ropes are large — big enough for an arm or leg to get stuck. While the top portion is only about 9 feet high, it seems much higher when you’re on top of it, trying to maneuver through unstable ropes along with other competitors. Even the 20-year-old male athletes eyed the net with an air of trepidation before launching themselves across it. But no matter how quickly or gracefully they maneuvered the obstacle, it was clearly one of the most formidable parts of the competition.

Many of the women struggled with net, hampered more by fear than ability, but the oldest female athletes had the hardest time. Between the instability and the height, they were facing a much greater physical challenge than younger athletes. In fact, many of them admitted to being terrified of heights as they approached the net. These 60-, 65-, and 68-year-old women climbed up, across, and down the cargo net, hands shaking and eyes wide with fear — but blazing with determination. By the time they reached the ground I was literally jumping up and down for them, beyond excited and inspired by their accomplishment. “You did it! You did it!” I shouted, exultant.

And every single woman responded the same way. With a shrug and an eyeroll, they said “Well, I tried.”

I watched hundreds of athletes tackle the cargo net. I watched men and women launch themselves across with little fear for physical safety, and I watched men and women move cautiously, wary of the gaps, the height, and the threat of the ropes. I even watched a 30-year-old man pull his shoulder out of socket as he rolled across the net. But the only ones who downplayed their achievement were women. Worse, it was the women who fought the hardest, whose achievement was the greatest testament to their grit and determination, who were the most self-critical.

I’m fighting this battle with my 13- and 10-year-old daughters at home. They’ll come home with a test grade that’s much higher than their previous one, clearly a result of their hard work, but when I try and celebrate that they both say, “Yeah, but …”

“Yeah, but I still missed 4 questions.” “Yeah, but I bombed the other quiz.” “Yeah, but it’s still not an A.” They have endless possible ways to dismiss and diminish their actual accomplishments, but they’re sending the same message each time: “Yeah, but I’m still not perfect.”

I’ll admit that I do the same thing. When someone compliments my athletic ability or my job performance, I’m quick to point out what a hot mess the laundry situation is. I hear the same exchange happen between moms at school events all the time: “Oh wow, you’re so talented at cupcake decoration!” one mom will say, only for the other to respond, “Yeah, but I haven’t mopped the kitchen floor in two weeks.”

Why do we do this? When we’ve achieved something, from conquering a fear to improving a test score to finally cleaning out the closets, why do we immediately diminish that accomplishment by focusing (either externally or internally) on everything else we haven’t accomplished?

I used to think it was virtuous to downplay my accomplishments. After all, modesty is a virtue, right? It’s a virtue we teach early, focusing especially on girls. But many of us (me included) have inherited a misguided understanding of modesty.

The word modesty comes from a middle French word meaning “freedom from exaggeration, self-control” and a Latin word meaning “moderation, sense of honor, correctness of conduct.” Both of these words were associated with public conduct — acting appropriately for the time and place. Modesty is closely related to courtesy and grace — two virtues that have little to do with our opinion of ourselves, and instead relate to respect for and consideration of others.

When someone notices an achievement and compliments you on it, that compliment is a gift. It’s a gift freely given, and refusing to accept it — or worse, undermining it — is the opposite of graciousness. It’s also the opposite of modesty, especially if you add the “yeah, but” qualifier. Rejecting a compliment and then bringing attention to a weakness is actually an attention-seeking behavior. It’s kind of like begging for a compliment in another area, or at least fishing for reassurance. There’s nothing modest about that.

We might feel like it’s what we’re “supposed” to do, but downplaying our accomplishments is actually a double offense against virtue. It’s not only a false modesty, but also  a betrayal of our own honor and integrity. When we’ve worked for something, whether it’s climbing over a cargo net or learning to sew a straight row of stitches, it’s an achievement. We should own the work we did and the accomplishment it produced and be proud when someone notices, instead of thinking guiltily of all the other things we haven’t yet mastered or downplaying it.

Here’s the truth, ladies: we’re never going to be perfect. We’re never going to have all the things under control, all the lists checked off, all the rooms clean at the same time, or all the laundry done and put away. And guess what? That’s okay. That is, in fact, life — the same life every other woman is living. It’s different for all of us, but we all have our own personal cargo nets — those things we’ve tackled with fear and trepidation, terrified to fail but determined to accomplish. And those things are huge, real, amazing achievements that we should take pride in. When we don’t, we’re telling others that all that work didn’t matter — and worse, we’re teaching ourselves, and maybe our kids, the same thing.

Read more:
How to teach human dignity and modesty to kids from an early age