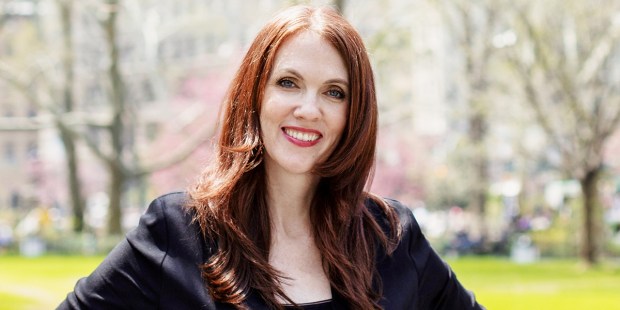 Catching up with the Catholic convert, writer, talk radio host, and mom of six who recently added “stand-up comedian” to her resume…

Jennifer Fulwiler has been taking the Catholic world by storm since her conversion in the 2000s. Her books, Something Other Than God and One Beautiful Dream, are bestsellers, and she hosts a popular radio show on SiriusXM’s Catholic Channel—all while being a wife, mother, and homeschooler. Now she’s begun an exciting venture as a stand-up comedian.

It’s not exactly common to see moms performing stand-up, and just about unheard-of for a comedian to be a Catholic homeschooler with six kids. But Fulwiler would say that’s exactly the point.

“There is almost nobody in comedy who’s bringing this perspective as a woman with a larger than average family, or even as a woman who lives in the suburbs, has kids, and is a person of faith,” Fulwiler says. “Especially among female comics, that perspective is way under-represented, and I think there’s a place for that in the comedy world.”

What inspired Fulwiler to make the jump from writer and radio host to stand-up comedian? It turns out that the work she was already doing inspired her, so comedy seemed the natural next step.

“I realized in all the different work that I do, my speaking and writing and on my radio show, people said what they liked most was my humor,” she says. “I began to think about how I could do more of that. The purest form of humor is stand-up comedy, and when I looked into it, I liked it a lot.”

When Fulwiler started to explore going into comedy, she didn’t want to approach it as an afterthought to her previous media work. Stand-up is a serious art form, she said, and one that she has taken seriously and worked hard to respect. Part of that process included going outside her comfort zone to test out her material at comedy clubs in her hometown of Austin, Texas, and finding a new benchmark of success through working with a whole new audience.

“I go to real comedy clubs where nobody knows me or has heard of me, and work out my material,” she says. “The only way to know if you’re truly funny is to make people who have never heard of you laugh. If I can get a roomful of 30-year-old guys who don’t know me to laugh, I know I’m doing a good job.”

Her hard work studying and practicing stand-up has paid off: The audience reaction has exceeded her highest hopes.

“The response is much bigger than I expected,” she says. “I thought people would like it but I’m shocked by how quickly my shows are selling out and the number of people interested. It’s way more successful than I ever dreamed it could be.”

I was in the audience at her Chicago-area show. The enthusiasm was almost palpable in the theater, which Fulwiler also noticed and really enjoyed from the stage.

“It met my wildest expectations because of the crowd,” she said. “They were so engaged and lit up and ready to have a good time. It brought a magic to the night, and was nothing I could have orchestrated on my own.”

I attended the show with several friends, all of us mothers, for a girls’ night out. When I mentioned this to Fulwiler, she shared that she had hoped her tour would create opportunities for women to have a fun night out, showing how well she understands what it’s like to be a mother to little ones.

“One of my goals for this tour is not just bringing great, high-quality comedy to people, but giving women like me a chance to have a girls night out, and just go out and have fun,” she said.

Jen spent many years deep in “the trenches” of parenting, giving birth to six children in just eight years. Now that her children are getting older, she looks back on her experiences and shares a few tips she’s learned along the way about having a family and following your dreams:

“Not only do I not do it all alone, but I don’t try to do it alone,” she said. “I don’t think parents were meant to raise kids alone. I have spent over a decade of my life really focusing on assembling a support system.”

2. Remember you and your husband are a team.

“Make everything you do ‘our thing’ rather than ‘my thing,’” she said. “Even when my husband ran a law firm for a long time, I saw it as something we were doing together. It’s the same with my comedy tour: We are very involved with each other’s work. I think tension can come in a marriage when we isolate ourselves and tell our spouse to ‘stay out of this.’ Everything we do in our work is our thing.”

3. Don’t put limits on God or on what He is calling you to do.

“Going into stand-up has been a wild and very scary adventure for me,” she said, “but I’d like to encourage people to be more fearless in discerning what God is asking of them. Really exciting things happen when you stop putting limits on God and say ‘Hey, I’ll try it. Even if I fail, I’ll give a shot.’”

Fulwiler just added new cities and dates to her comedy tour, and they can be found at NaughtyCornerTour.com.

Her next book, Your Blue Flame, helps people to find the God-given gift they’re meant to share with the world. It will be published in May 2020 and is available for pre-order.