It’s still ‘A Beautiful Day in the Neighborhood’ for Mrs. Rogers 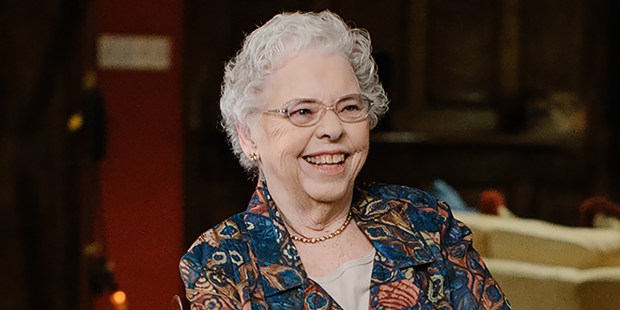 Mister Rogers was a hero to many. Now his wife, Joanne Rogers, tells Aleteia who Fred Rogers’ heroes were.

When an Esquire reporter named Tom Junod interviewed Fred Rogers, it changed his life. The piece he wrote, “Can You Say … Hero?,” inspired both the new movie A Beautiful Day in the Neighborhood (out this weekend, starring Matthew Rhys as Vogel and Tom Hanks as Rogers) and last year’s documentary Won’t You Be My Neighbor?.

For the fictional Vogel in the new film (who represents the real-life Junod), as well as for many of us, Rogers was a hero—one who feels like we need more of than ever. But who were Mister Rogers’ heroes?

“Teachers,” said Joanne Rogers, who was married to Fred Rogers for more than 50 years until his death in 2003. “Mostly teachers. And he felt that also people who just knew what they loved doing, and doing it in front of others. They were [his] heroes. That’s what he thought a good teacher was.”

I had a chance to talk with Joanne Rogers along with Bill Isler, retired president and CEO of the Fred Rogers Company, about Fred Rogers and his legacy in connection with Beautiful Day. Joanne says that while Fred might never have called himself a hero, he did consider himself a teacher—more a teacher than entertainer, in fact. Joanne says that as Fred was developing Mister Rogers’ Neighborhood, a psychologist cautioned him about being too wrapped up in teaching.

“She said, ‘Don’t forget the fun, Fred.’” Joanne said. “In that way, he tried to have a lot of entertainment, I think. And did. In a different way than most children think of being entertained.”

Those differences made Mister Rogers’ Neighborhood stand apart from most children’s television programs—and made it an unlikely hit. While Sesame Street was revolutionizing children’s TV with frenetic pacing and staccato rhythms, Fred Rogers was slowing TV down, pushing into gentle pauses and lingering silences. In the documentary Won’t You Be My Neighbor?, the show’s longtime producer Margy Whitmer said, “If you take all the elements that make good television and do the exact opposite, you have Mister Rogers’ Neighborhood.”

But when it came to Rogers’ target audience—children often too young to tie their shoes—all those elements made the series as comforting as a warm blanket. And none of what you saw on Mister Rogers was an accident.

“I know how hard he worked to learn what he did, from people who did know about young children,” Joanne said. “And what was good for them and not good for them.”

Beautiful Day stresses how intentional Fred Rogers was in everything he did. He made every person feel special when he talked with them: It didn’t matter whether Fred was talking with a senator or a 4-year-old child or a cynical magazine reporter. That carried over to his work on television, too. His show might be seen in millions of homes, but he kept his focus intimate—thanks, Joanne says, to some early advice.

When Fred started out, he worked as a floor manager for NBC’s children’s program The Gabby Hayes Show in the early 1950s. Joanne recalls, “He asked Gabby Hayes, ‘What do you think of when you’re talking to the kids out there?’ And Gabby Hayes said to him something that he really found useful later on. ‘Freddy, I just think of one little buckaroo.’ And you know, that was what Fred thought about. One little buckaroo.”

But Isler says that without Mrs. Rogers, there would have been no Mister Rogers.

“Fred would talk about [how when] he started the program, he was producing 55 hours [of television] a year,” Isler said. “If it wasn’t for Joanne being home with the boys, there’s no way he could’ve done the work. So they both appreciated each other’s talent. And they complemented each other because they both believed in what the other was doing.

“As you can see [in the movie], it was a fun marriage,” Isler added. “Both had great senses of humor. If you know Joanne, you know Joanne is probably much more outgoing than Fred—”

“But they really did enjoy each other’s company also,” Isler said.

The movie, Joanne says, reflects her late husband to near perfection.

“I thought they did a wonderful job,” she said of A Beautiful Day. “Just wonderful. I heard someone say that Tom Hanks just kind of disappears into his characters. And it’s true. He’s very, very good at it. The first time I saw a picture of him dressed like [Fred]—he was sitting down [in front of his] trailer. And I had to look twice.”

A Beautiful Day in the Neighborhood opens in theaters nationwide today. The story might be, strictly speaking, make-believe. But for the woman who knew Mister Rogers better than anyone, it felt real enough.

Read more:
It’s been 15 years since Mister Rogers died, but he’s still with us