Why is St. Cecilia the patron saint of musicians? 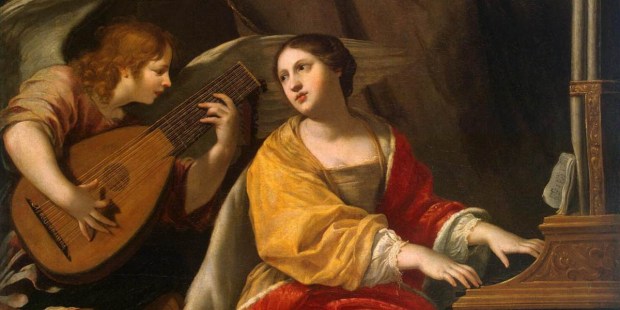 Cecilia’s connection to music is wrapped up in the many legends that surround her life.

Much of St. Cecilia’s life is steeped in legend, which is why it is difficult to discern between fact and fiction. What is known is that Cecilia likely lived in Rome during the 2nd or 3rd century and was martyred for her Christian faith.

One reason she is connected to music is a medieval interpretation of her life, as explained by the Catholic Encyclopedia.

Medieval pictures of the saint are very frequent; since the fourteenth and fifteenth centuries she is given the organ as an attribute, or is represented as playing on the organ, evidently to express what was often attributed to her in panegyrics and poems based on the Acts, viz., that while the musicians played at her [wedding] she sang in her heart to God only (“cantantibus organis illa in corde suo soi domino decantabat”); possibly the cantantibus organis was erroneously interpreted of Cecilia herself as the organist. In this way the saint was brought into closer relation with music.

If this is true, then it appears Cecilia never actually sang out loud or played any musical instrument. Nevertheless, her patronage of music was firmly cemented in the 16th century.

When the Academy of Music was founded at Rome (1584) she was made patroness of the institute, whereupon her veneration as patroness of church music in general became still more universal.

Over the centuries she has been the inspiration behind many composers and her feast day became an annual celebration of music.

While she may not have been very musically talented, Cecilia now resides in heaven where she joins the saints and angels “singing a new hymn before the throne” of God (Revelation 14:3).

Read more:
How St. Cecilia was miraculously protected by her Guardian Angel