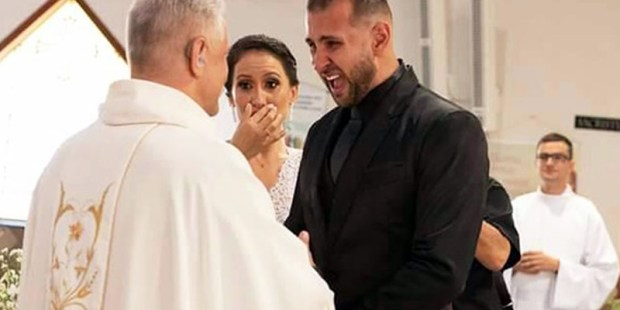 Friends flew the priest 500 miles to celebrate the wedding nuptials for the unsuspecting couple.

Dayton Denis Siqueira and Simone Aparecida Pereira must have felt a moment of panic when they reached the altar at the beginning of their wedding on October 5 of this year, only to be told that the priest they’d scheduled for their wedding wasn’t able to be present. It looked doubly problematic, because Dayton and Simone, who live in the Brazilian state of São Paulo, are deaf, and there are very few priests in their region of Brazil who could celebrate the ceremony in Libras (Brazilian sign language). If the one they had booked couldn’t preside over the wedding, who would?

“When we entered the church and saw there wasn’t any priest, we were surprised. We looked at each other, confused,” Pereira told reporter Simone Machado of UOL. Then, the seminarian who’d told them the supposedly bad news announced that a replacement had already been arranged. They were told to look towards the back of the church … and in walked Fr. Wilson Czaia, the only deaf priest in Brazil, who had been instrumental in the bride and groom’s meeting each other. Fr. Wilson had been flown in from his diocese (Curitiba) 500 miles away as a special surprise for the couple.

“At that moment, we felt the presence of God and of our guardian angel. It was very emotional and inexplicable,” Pereira told UOL.

According to reporter Thaisa Figueiredo of Brazilan news outlet G1, it all began in 2012 when Siqueira went to a Christian music festival, where he met Fr. Czaia. Siqueira was feeling alone and in low spirits—but Fr. Czaia understood him and encouraged him.

Siqueira was about to leave the festival, but for some reason (not explained in available sources), Fr. Czaia told him to wait a few minutes. In that lapse of time, Siqueria saw Pereira in the midst of the crowd, and apparently, they “clicked” immediately; the two chatted for a while, and then shared their contact information so they could continue the conversation by texting.

It was a long distance relationship for a while (they lived a couple of hours apart) but four years later they moved in with each other. It was then that they discovered the Deaf Ministry of their local diocese, and started to go to church more often and learn more about the faith. Spending time with other couples at the parish inspired them to get married in the Church.

Siqueira, who wasn’t raised Catholic, went through catechesis and the sacraments of initiation in preparation for the wedding.

This September, the month before the wedding, they went back to the music festival where they’d met, and they unexpectedly ran into Fr. Czaia again too. The priest was brought up to speed on what had happened thanks to that conversation seven years earlier, and the couple lamented not being able to have him at the ceremony, because of the distance and the cost of travel and lodging.

A few days later, friends of Siqueira and Pereira from the Deaf Ministry contacted him to see if he would be available to celebrate the wedding. He agreed, and asked that it be kept secret, so it would be a surprise. They pooled resources and bought him plane tickets so he could travel to and from the wedding without missing other commitments he already had scheduled.

The secret was well kept; the unwitting couple even spoke to the priest on the phone the day before the wedding, telling him how sad they were he wasn’t going to be there.

So it was that Dayton and Simone found themselves at the foot of the altar, caught by surprise and overwhelmed with emotion when Fr. Wilson Czaia strode up the aisle to celebrate their wedding. “At that moment, it seemed like Jesus entered with Fr. Wilson,” Dayton told G1.

Maria Rita Capel is one of the Deaf Ministry’s translators, and she played a key role in organizing the surprise. “It was very beautiful, and I feel happy … Living is about making other people happy. [Deaf people] are human beings who need to be in the middle of things, included, not set apart.”

It’s a truth that applies not only to the hearing impaired; everyone needs to be given a chance to be included, to be called to grow in faith and in conformity with Christ, and to participate in sacramental life. It’s an important lesson we all need to learn or to be reminded of, and to put into practice.

Read more:
Viral Photos: Bride and Groom Surprise Grandma in the Hospital on Their Wedding Day