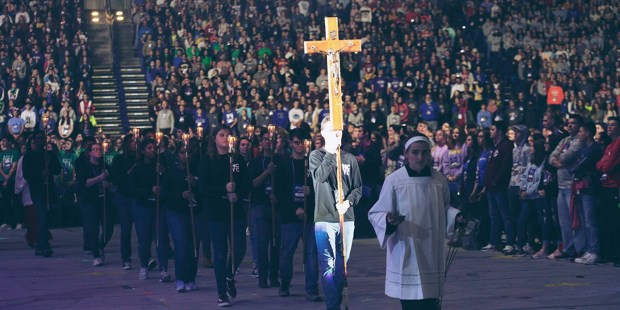 NCYC underway in Indiana offers a “distinctly Catholic setting” for an experience of the Church.

The pope’s representative in the United States just told hundreds of young people that they are the “now of the Church,” the “present of the Church.”

His audience — hundreds of wildly excited high-school age Catholics — show that this “now” is full of hope.

The National Catholic Youth Conference (NCYC) is held every two years for high schoolers and their chaperones. This year’s event wraps up on Saturday in Indianapolis, Indiana.

Many other Catholic leaders are on hand for dozens of breakout sessions, with many topics touching on social media, identity, and the challenges of the culture. Other topics range from specific issues such as racism, to being a Catholic in the military, to prayer and Scripture.

The theme this year is Blessed, Broken, Given.

One of the highlights of the NCYC is the time the young people spend in Eucharistic Adoration.

Youth are also able to follow the event through an app, and it is live streamed, and also on Facebook.

This year, Pope Francis sent a video message to the young people, inviting them to evangelize their peers.