Martyrs aren’t a relic, but an inspiration to renewed evangelization, says pope 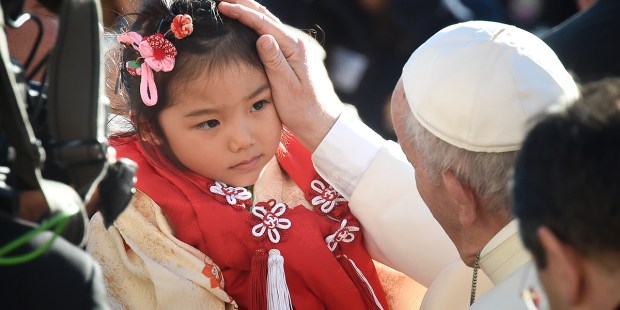 Francis notes that he himself as a young Jesuit found powerful inspiration in the story of the early missionaries and the Japanese martyrs.

In his words at the Martyrs Monument in Nagasaki, Pope Francis told those gathered that he had come as a pilgrim to pray, and to confirm Catholics in Japan in the faith.

The Holy Father’s trip to Japan is particularly poignant because as a young Jesuit, the future pope wanted to follow in the footsteps of St. Francis Xavier and other Jesuits who planted the seeds of faith in Japan, many of whom were killed as martyrs. Because of his health, young Fr. Bergoglio never got permission to become a missionary in Japan.

Read more:
As a young Jesuit, the future pope longed to go to Japan. Will he now?

When the pope spoke with Japan’s bishops on Saturday, he recalled his youthful desire, saying he was among them as a missionary pilgrim in the footsteps of the great witnesses to the faith, such as Saint Francis Xavier whose arrival there 470 years ago marked the beginning of the spread of Christianity in the country.

Reflecting on the images and names of those inscribed on the Martyrs Monument, including St. Paul Miki, the Pope noted that this shrine does more than speak of death.

“It also speaks of the triumph of life over death,” he said.

Recalling his predecessor Saint John Paul II, the Pope said that he saw this place “not simply as the mount of the martyrs, but a true Mount of the Beatitudes.”

Light of Gospel triumphs over persecution

It is here, Pope Francis underlined, that “the light of the Gospel shone forth in the love that triumphed over persecution and the sword.”

“This shrine”, he continued, “is above all a monument to Easter, for it proclaims that the last word – despite all evidence to the contrary – belongs not to death but to life.”

Witness of the martyrs

The witness of the martyrs, emphasized the Pope, “confirms us in faith and helps us to renew our dedication and commitment to missionary discipleship which strives to create a culture capable of protecting and defending all life through the daily ‘martyrdom’ of silent service towards all, especially those in greatest need.”

Pope Francis said he had come to the monument of the martyrs to pay homage to these holy men and women.

But, he added, “I also come in humility, as one who himself, as a young Jesuit from ‘the ends of the earth,’ found powerful inspiration in the story of the early missionaries and the Japanese martyrs.”

Martyrs: not a glorious relic but a living memory

The Pope expressed the hope that the sacrifice of these martyrs would not remain as a “glorious relic of the past… but rather as a living memory, an inspiration for the works of the apostolate and a spur to renewed evangelization in this land.”

Concluding his greeting, the Pope said that “in this place we are united with those Christians throughout the world who, in our own day, suffer martyrdom for the faith.”

The witness of these modern martyrs of the 21st century “summons us to set out with courage on the path of the Beatitudes,” he said.