Pope in Nagasaki: Having weapons is not path to real security 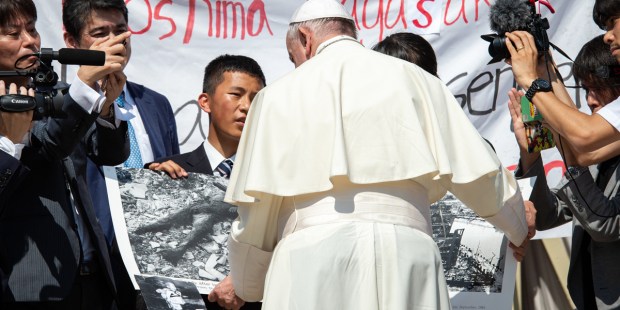 At 11:02 on the morning of 9 August 1945, an atomic bomb exploded in Nagasaki, Japan. One-third of the city was destroyed and around 150,000 people were killed or injured. Many more died later from the effects of radioactive poisoning.

Today, a commemorative monument to peace marks the spot where the bomb fell.

Pope Francis visited the Peace Memorial in Nagasaki on Sunday morning. He placed flowers at the foot of the monument, and noted how “This place makes us deeply aware of the pain and horror that we human beings are capable of inflicting upon one another.”

Beside the Atomic Bomb Hypocentre stand the remains of Urakami Cathedral. Once the largest church in East Asia, it was completely destroyed by the bomb.

In his discourse, Pope Francis referred to a damaged cross and a statue of Our Lady that were recently discovered on the Cathedral site: “They remind us once more of the unspeakable horror suffered in the flesh by the victims of the bombing and their families,” he said.

A false sense of security

“One of the deepest longings of the human heart is for security, peace and stability,” continued the Pope. “The possession of nuclear and other weapons of mass destruction is not the answer to this desire.”

Pope Francis reflected on how “our world is marked by a perverse dichotomy that tries to defend and ensure stability and peace through a false sense of security sustained by a mentality of fear and mistrust, one that ends up poisoning relationships between peoples and obstructing any form of dialogue.”

Peace and international stability, said the Pope, “can be achieved only on the basis of a global ethic of solidarity and cooperation in the service of a future shaped by interdependence and shared responsibility in the whole human family of today and tomorrow.”

A waste of resources

Pope Francis reaffirmed that “the arms race wastes precious resources that could be better used to benefit the integral development of peoples and to protect the natural environment.”

“In a world where millions of children and families live in inhumane conditions, the money that is squandered and the fortunes made through the manufacture, upgrading, maintenance and sale of ever more destructive weapons, are an affront crying out to heaven,” he said.

In a world where millions of children and families live in inhumane conditions, the money that is squandered and the fortunes made through the manufacture, upgrading, maintenance and sale of ever more destructive weapons, are an affront crying out to heaven

A climate of distrust

If we are to build a world of peace, free from nuclear weapons, we must involve everyone, said the Pope: “individuals, religious communities and civil society, countries that possess nuclear weapons and those that do not, the military and private sectors, and international organizations.”

Pope Francis called for a ”joint and concerted” response to the threat of nuclear weapons, “inspired by the arduous yet constant effort to build mutual trust and thus surmount the current climate of distrust.”

“We are witnessing an erosion of multilateralism which is all the more serious in light of the growth of new forms of military technology”, continued the Pope, describing this approach as “highly incongruous in today’s context of interconnectedness.”

Pope Francis confirmed the Catholic Church’s commitment to promoting peace between peoples and nations, calling it “a duty to which the Church feels bound before God and every man and woman in our world.”

“May prayer, tireless work in support of agreements, and insistence on dialogue be the most powerful ‘weapons’ in which we put our trust and the inspiration of our efforts to build a world of justice and solidarity that can offer an authentic assurance of peace,” he said.

A challenge for everyone

Pope Francis said he is convinced that a world without nuclear weapons is possible and necessary, but “we need to ponder the catastrophic impact of their deployment, especially from a humanitarian and environmental standpoint, and reject heightening a climate of fear, mistrust and hostility fomented by nuclear doctrines.”

The task of creating tools for ensuring trust and reciprocal development is one that concerns and challenges every one of us, said Pope Francis.

“No one can be indifferent to the pain of millions of men and women whose sufferings trouble our consciences today. No one can turn a deaf ear to the plea of our brothers and sisters in need. No one can turn a blind eye to the ruin caused by a culture incapable of dialogue.”

All instruments of peace

The Pope invited everyone to pray daily “for the conversion of hearts and for the triumph of a culture of life, reconciliation and fraternity. A fraternity that can recognize and respect diversity in the quest for a common destiny.”

“In this striking place of remembrance that stirs us from our indifference”, said the Pope, “it is all the more meaningful that we turn to God with trust, asking Him to teach us to be effective instruments of peace and to make every effort not to repeat the mistakes of the past.”