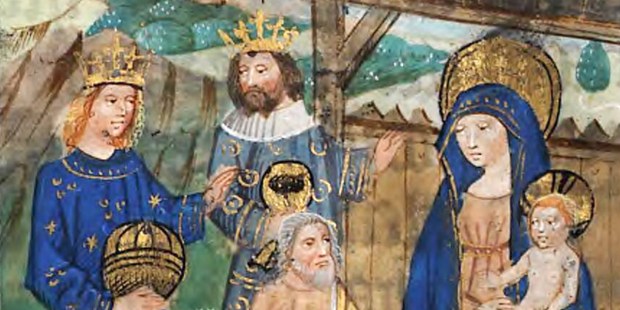 If any of the Christmas cards you receive this year include a depiction of the Three Kings, take a closer look and see if any of them are black. Yes, we’ve certainly seen a lot of modern representations of the Magi in which one of them is black. But it wasn’t always that way.

Art before the 1480s usually depicted all three of these Wise Men as white. And the J. Paul Getty Museum in Los Angeles has mounted an entire exhibition this season to explain why.

“Balthazar: A Black African King in Medieval and Renaissance Art” runs through February 16 at the Getty Center. It explores the juxtaposition of a seemingly positive image with the history of African slavery.

“Early medieval legends reported that one of the three kings who paid homage to the newborn Christ Child in Bethlehem was from Africa,” the Getty says on its website. “But it would be nearly one thousand years before artists began representing Balthazar, the youngest of the magi, as a Black African.”

The Gospel According to St. Matthew speaks about “wise men from the East” who came to Jerusalem, inquiring about the newborn “king of the Jews.” No number is given for the wise men, but because there were three gifts—gold, frankincense and myrrh—it has always been assumed there were three kings.

Later writers assigned them names: Caspar, Melchior, and Balthazar, and specified that the kings came from the three continents then known to those living in the Mediterranean world: Africa, Asia, and Europe. Writing in the eighth century, an author known to us only as Pseudo-Bede mentioned “a dark, fully bearded king called Balthazar.”

But artwork did not represent this view. For centuries, all three kings were white. Even when the African identity of the third Magus was alluded to in a 1266 sculpture by Nicola Pisano, it wasn’t by depicting Balthazar as black but by giving him two African attendants. “Their features and hair clearly identify them as sub-Saharan Africans; this identification is underscored by the camels they ride,” Getty said.

But at the end of the 15th century, we suddenly see a larger number of images in European art depicting Balthazar as either associated with Africa through costume, or painted as a black African. What happened? The fact is, the paintings are in the time period of 1480/90, which is just when the Portuguese slave trade began on the west coast of Africa.

The Getty proudly speaks about one of its own paintings in the exhibition, The Adoration of the Magi, by Andrea Mantegna. Painted between 1495-1505, it “reveals the artist’s awareness of lands beyond Italy. Associations with Africa are apparent not only in Balthazar’s complexion and costume but also in the container he holds. The object appears to be made from alabaster, a semi-precious stone imported from Africa and highly valued by medieval and Renaissance Europeans.”

Mantegna worked as the official court painter to Isabella d’Este, marchioness of Mantua, and her husband, the Marquis Francesco, Getty explains. Sadly, they were known to have had black African slaves. But one of them may very well have served as a model or inspiration for Balthazar.