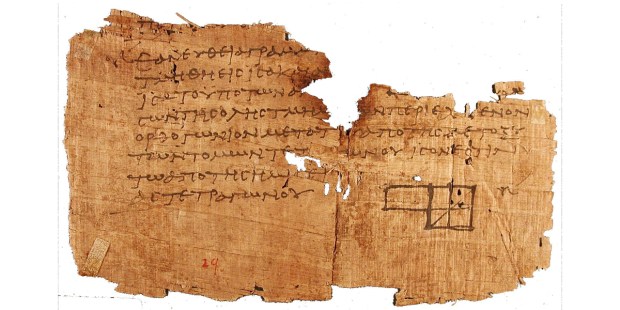 The Oxyrhyncus Hymn praises the Holy Trinity. The manuscript preserves both the lyrics and the original musical notation.

The Oxyrhynchus Papyri are a group of manuscripts discovered at an ancient rubbish dump near Oxyrhynchus (modern El-Bahnasa) in Egypt in the late 19th and early 20th centuries. All these manuscripts date from the time of the Ptolemaic and Roman periods of Egyptian history (that is, from the year 32 BC until the Muslim conquest of Egypt, in 640).

Among those manuscript, the “Oxyrhynchus Hymn” was found. This is the earliest known manuscript of a Christian Greek hymn containing both lyrics and Greek vocal musical notation. Written around the end of the 3rd century, the manuscript is now preserved at the Papyrology Rooms of the Sackler Library, Oxford.

The lyrics of the Oxyrhynchus Hymn begin by invoking silence for the praise of the Holy Trinity. This “silence” is a common trope in ancient Greek hymnody, and is traditionally referred to as “cosmic stillness.”

The translation reads as follows:

“together, all the eminent ones of God (…) [night] nor day (?) Let it/them be silent. Let the luminous stars not [. . .], [Let the rushings of winds, the sources] of all surging rivers [cease]. While we hymn Father and Son and Holy Spirit, let all the powers answer amen, amen, strength, praise, [and glory forever to God], the sole giver of all good things. Amen, amen.

You can listen to a rendition of this early hymn in the video below.