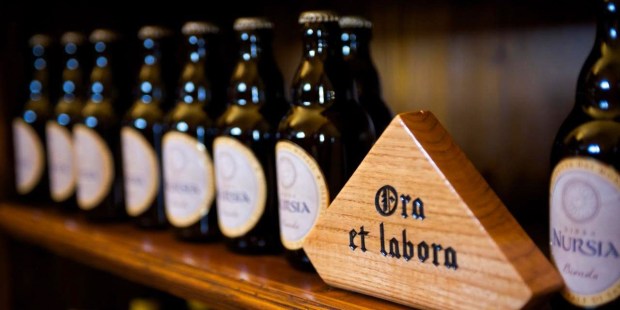 After a devastating earthquake in 2016, these monks seek to preserve their way of life by selling beer.

In 2016 a massive earthquake hit Norcia, Italy, and destroyed the Basilica of St. Benedict, which was built on top of the birthplace of Sts. Benedict and Scholastica, two very influential saints in the history of Western Christianity.

It was also the site of a Benedictine monastery led by a group of monks from the United States, who moved into the vacant building in 1998.

The monks were forced to flee the city after the earthquake, and established a temporary residence at another empty monastery outside the city walls. Since then the monks have been trying to maintain their way of life at their new location, following St. Benedict’s rule to be self-sufficient and support themselves through work.

Prior to the earthquake, the monks began experimenting with craft beer. Father Cassian Folsom, founder of the Norcia monastery, explained to NPR in 2015 that they “started brewing beer three years ago … [by learning] the art of brewing from the Trappist monks in Belgium, and found a niche in the Italian market.”

The brewing of beer has been a monastic business since at least the Middle Ages, so it was only fitting that the Benedictines in Norcia found their own brewery.

This brewery has now become a primary focus of their fundraising efforts, using it as a means to build a new monastery outside the city walls in such a way to withstand future earthquakes.

Recently the monks have been able to expand their distribution to outside Europe, focusing on direct sales to the United States. They even have a “Brewmonks Club” where “you pledge to buy a case of 12 bottles every month, or, every other month, for 1 year.” Members receive free shipping and are able to continually support the development of the new monastic foundation.

More information about the monastery can be found here, and their beer can be purchased online here.

Read more:
A Beer Crafted Carefully, Prayerfully and with a Holy Rule

Read more:
This Trappist beer is so good, monks struggle with demand