How to help your kids build better habits 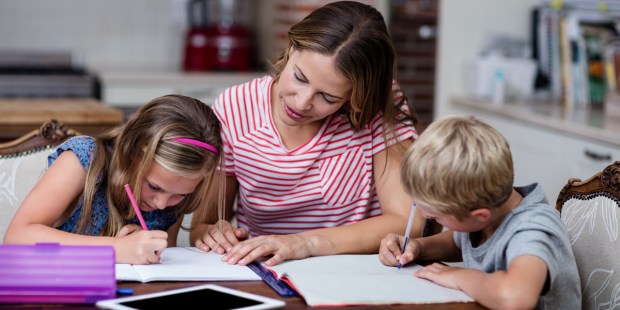 This 4-step process is easy and effective.

If you’re a human, you’ve no doubt developed a deep respect for the power habits have in our lives. But if you’re a parent, you’ve been blessed with the chance to understand and appreciate the abiding power of habits in a new and visceral way.

I still remember the shock I felt when I realized that my first child, who was 2 at the time, had internalized my habit of sitting in front of the TV when I rocked her to sleep. That year I gave up TV for Lent, so on Ash Wednesday I brought a book to the rocking chair instead of flipping on the TV. My 2-year-old, who begged to read books all day long, said clearly, “No book, wanna watch a show.” She twisted around in my lap impatiently, pointing insistently to the dark TV screen.

“No, we’re not going to watch shows for a few weeks,” I said. “But we can read instead, and you love reading!” Her eyes got wide as she realized I was serious, and then … total meltdown. She threw the most epic of toddler tantrums ever, and to my horror, she repeated that performance the next night. And the next.

In fact, it was a solid week before she stopped crying, and two weeks before she was resigned enough to her fate to stop asking. But the lesson I learned about how easily kids can pick up bad habits from us parents or peers, and how hard it is to break those habits stuck with me.

Unfortunately, it took me almost a decade to really figure out how to help my kids form good habits, and that was after years of trial and error on myself. Even then, I didn’t have a clear system for this process — until I read Atomic Habits by James Clear. He managed to explain much of what I’d learned in clear, direct, simple terms, because he focused more on the system of habit formation than the outcome.

Outcomes are good. Goals are good. But trying to change your behavior to attain a nebulous future “goal” just doesn’t work with human psychology — especially the teen and preteen variety. As I’ve learned in my fitness journey, you have to create a system that you enjoy — one that rewards you today in order to create the motivation to do it again tomorrow.

I figured out the fitness thing on my own, but I couldn’t figure out how to apply it to our family struggle with homework until I read Atomic Habits this past summer. In August, I implemented the 4-step system and stuck with it … but it wasn’t until now, months later, that I realized the system is actually running itself. It’s become habit … hallelujah! I’m so excited about how well this 4-step system works that I have to share it with you.

With any behavior change, you have to start by making it impossible to ignore. It’s why we never get around to cleaning out the attic–we only have to look at it twice a year, max. So start by making the habit you’re trying to instill something you can’t avoid. For my kids, I created a homework space at the table adjoining the kitchen. It’s the space they walk into when they get home, and it’s the space where I spend afternoons cooking. They can’t avoid it, and they know I’ll notice if they try.

You can’t build a habit if you dread it every day, so you have to make the habit attractive in some way. Homework is a tough one. At first, I tried organizing homework supplies in a neat and appealing container in the middle of the table, which was … ineffective, obviously. Then I thought, why not let the kids eat snacks while they do homework instead of before? They always want snacks, so it was easy enough to tie the snack to the starting of homework — and way more successful than neatly sharpened pencils.

The best way to short-circuit habit building is to make it complicated or excessive. You can’t change five habits in one month–you can maybe change one, and that’s if you’re pretty disciplined already. Nor can you cook 47-step recipes from organic cookbooks every night–that’s not a sustainable change. You can build one simple habit at a time, period. So when I started this in August, that’s all I started. No other changes, no new chores, no shifting expectations–there was just one thing the kids did when they got home, and they did it every day: they sat down at the table and did their homework while they ate a snack.

This is the biggest thing I learned on my own about habits — if there’s no immediate reward, they’re unsustainable. Preventing a negative doesn’t work, which is why kids routinely don’t hand in homework and don’t care much about the demerits or notes home that follow. Some kids are intrinsically motivated by the satisfaction of work completed, but most are not. They are, however, motivated to go play outside with their friends, or go to birthday parties, or spend the hours before dinner with free time and the freedom to enjoy it as they please. And they know that once their homework is finished, they’re free till dinner. It’s amazing how much more quickly homework gets completed now.

So get creative and tackle your own habit-building with this system. It’s easy and effective–I almost can’t believe how automatically my kids sit down to homework now, with zero reminding or nagging. Spending the time and effort now on implementing the system will save you countless hours of stress later — and it will give your kids the skills to build their own good habits for years to come.