Listen to the Benedictine Monks of Silos singing Gregorian Chant 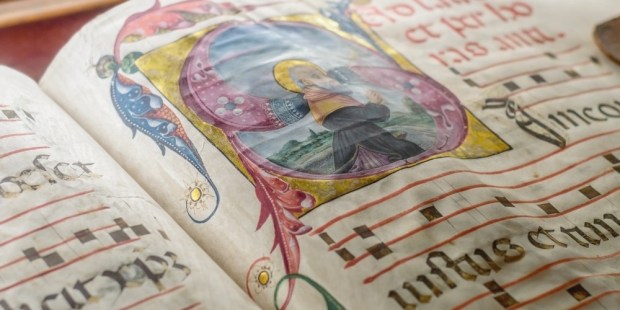 This album made #3 in the Billboard 200 music chart, and is a certified triple platinum.

Gregorian chant is a form of monophonic unaccompanied sacred music sung in Latin (although it also includes Greek) belonging to the Western, Roman Catholic tradition. It developed mainly in western and central Europe during the 9th and 10th centuries, and experienced some later modifications in the Late Middle Ages and in the Early Renaissance. Even if tradition credits Pope Gregory I with inventing Gregorian chant (hence its name, “Gregorian”) today most scholars believe that this kind of monophonic psalmody is rather a musical development stemming from Carolingian, Roman, and Galician liturgical chants.

The Monastery of Santo Domingo de Silos is a masterpiece of Iberian Romanesque Art. Named after the 11th-century Benedictine saint, Domingo de Silos (who also served as the Abbot of the same monastery), the building dates to the seventh century, and was originally called the Monastery of Saint Sebastian De Silos. Even if in its early days the monks in this monastery would sing Mozarabic Chant, they switched to Gregorian in the 11th century. Now as members of the Solesmes Congregation, their singing is influenced by that of Solesmes Abbey.

The recording we include in the video above has received very interesting commentaries from the critics. A very original review in Gramophone summarizes the whole spirit of this album: “The ensemble is not always perfect, but if these are not professional singers, they are, and they sound like, truly professional monks.”