As a younger man, Van Gogh thought he would become a Protestant pastor. At the end of his life, he reinterpreted the sacred art of Delacroix and Rembrandt.

Vincent van Gogh is much less well known for his religious paintings than his sunflowers, starry nights and endless self-portraits. The reason is not that they are all stashed away in the Vatican collection – although one is. The reality is that the few he painted are copies of other works and therefore receive little attention. This is a paradox for a man of deep spirituality. In his earlier days he had tried to become a Protestant pastor, like his father and grandfather. After failing in this vocation he asked his brother Theo: “How can I be of use in the world? Can’t I serve some purpose and be of any good?” 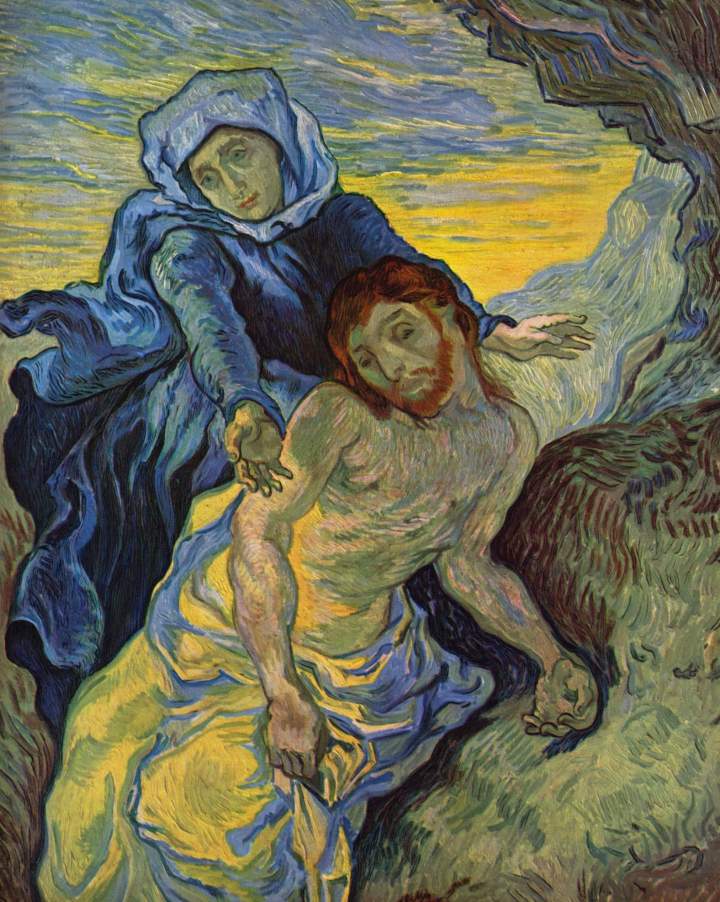 The answer was art. It’s confusing that instead of putting his religious zeal into reimagining Christian themes, he copied others. These were not faltering early attempts at putting brush to canvas. They came near the end of his life, when he admitted himself to an asylum. Being desperate for subject matter he turned to the acknowledged masters. His interpretations of works by Delacroix and Rembrandt were the only truly religious paintings he ever executed.

It seems strange that a man with improbable funds of imagination did not attempt his own approach to the Crucifixion or the Madonna and Child or any of the saints or biblical stories he knew about. Perhaps he thought himself unworthy rather than unable. It was probably not the fault of the brand of Protestantism he grew up with, which was fairly liberal.

One of his earliest works does have an original religious subject. In its initial form (1884) it is a somber view of his father’s Dutch Reformed parish church. A year later he added a congregation with the extra bleakness of mourning attire. As his father had died recently it is more likely to be a comment on his grief than on church attendance. Someone with an eye for originality stole the painting in 2002 and it was not recovered until 2016 in the sunnier climes of Naples.

There was one aspect of mainly Catholic belief that fascinated him above all else. He was apparently obsessive about Mary Magdalene. Her status as a supposedly fallen woman seems to have been of interest to him although he never painted this favourite of so many other artists. She even had red hair, at least according to artists such as Giotto and El Greco, which could have matched his fascination with his own appearance. He painted around 30 self-portraits.

The closest Van Gogh came to immortalising the Magdalene is in a scene painted at Les Saintes-Maries-de-la-Mer in the South of France. It features a beach with boats; more importantly it’s where local legend says Mary Magdalene arrived when she brought Christianity to France. This is an oblique reference, but at least there is a religious connection. His famous painting of his bedroom in Arles shows considerable detail but no sign of a cross, crucifix or any sacred art on the wall. Three years ago the Art Institute of Chicago invited guests to stay in a mockup of the room for only $10 a night as a promotion for an exhibition on van Gogh’s bedrooms. I’m not sure whether they included a Gideon Bible.

Just when it looked like Vincent’s only religious works were copies, a theory has emerged in recent years that his Cafe Terrace at Night (1888) is a highly symbolic reworking of the Last Supper. On first inspection there is no sign of this, but arranged around the numerous tables are 12 diners supervised by a 13th figure, a waiter with long hair and what looks like a white robe. A human shadow, perhaps a reference to Judas, is about to vanish on the left. There is even a cross formed by the window behind the solitary standing figure. Perhaps we should examine all van Gogh’s paintings more closely, especially those sunflowers.

It sounds like another of the far-fetched conspiracy theories. That’s until you discover that at the time he painted it, Van Gogh wrote to his brother Theo about the work, explaining that he had a “tremendous need for, shall I say the word—for religion.”

Perhaps the troubled artist wanted to explore the security of religion. Or maybe he just wanted to reference the work of a master painter. You can decide for yourself!