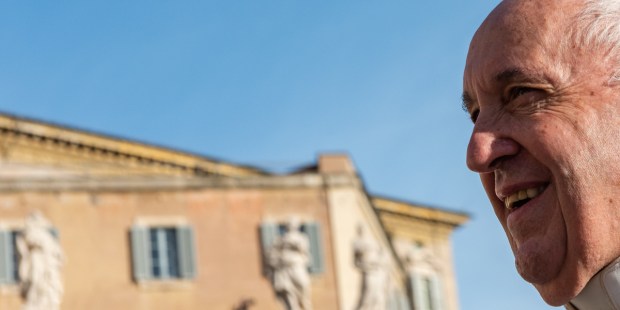 At the end of this week’s general audience, starring actors from the musical Bernadette of Lourdes performed their title song for Pope Francis.

The group was in Rome to promote the musical, which began playing in Lourdes last July.

Part of the cast attended the general audience on Wednesday, with the producers and main actors obtaining seats near the pontiff.

At the end of his address, the Holy Father greeted the actors, who gave him the program of the musical and exchanged a few words, including an invitation for the pope to come to Lourdes.

The entire troupe then performed a cappella the theme song of the show, ‘Madame,’ under the attentive ear of the Argentine pontiff. “It’s beautiful,” he proclaimed spontaneously after the song, before blessing all the actors.

Bishop Anthony Hérouard, apostolic delegate for the shrine of Lourdes, was instrumental in arranging this event.

During his meeting with Pope Francis last August, he had told him about the musical. Drawn from historical accounts, Bernadette of Lourdes traces “faithfully” the story of the little seer, noted a statement from the Holy See. With more than 70,000 tickets already sold in France, the show is expected to tour internationally next year.