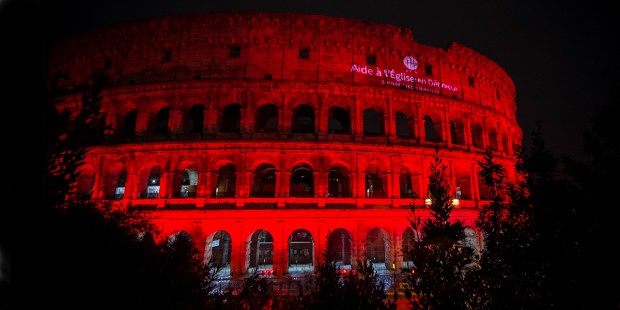 Today buildings all over the world, were bathed in blood-red light in order to draw attention the the plight of persecuted Christians.

Red Wednesday is a campaign first organized I 2016 by the papal charity Aid to the Church to draw attention to those who are suffering for their Christian faith. Red representing martyrdom in Christian tradition.

According to Aid to the Church in Need’s report, 300 million Christians are facing persecution today, and Christians are the most persecuted religious group in the world.

Buildings all over the world were illuminated in red in a call for greater respect and tolerance for religious minorities. From London’s Westminster Cathedral to the over 2,000 parishes that took part in the Philippines, Christians joined in solidarity with their brothers and sisters in faith.

Take a look at some of the buildings that took part in #RedWednesday this year.

This evening, #RedWednesday comes to @WestminsterCath! The procession begins at Parliament Square at 6pm, reaching the cathedral for 6.30.
Find out how you can support @acn_uk at https://t.co/Q46KeMRw3p pic.twitter.com/57IOhMh2Tb

LOOK: Manila Cathedral lit in red to mark #RedWednesday as part of Aid to the Church in Need’s campaign in solidarity with persecuted Christians around the world. #cbcpnews pic.twitter.com/NaSbsGUBxv

PHOTO: The University lights up the facade of St. La Salle Hall in red—the Christian color of martyrdom—to support the celebration of #RedWednesday today, November 17.

The Red Wednesday campaign commemorates and honors all Christians worldwide who suffered under persecution. pic.twitter.com/4o64y9Yj5D

Budapest’s Chain Bridge is one of many world landmarks illuminated red tonight in solidarity with the 245 million persecuted Christians around the world. #RedWednesday #ICCP_Budapest pic.twitter.com/i0lykgNCvt