How St. Nicholas was the first “Secret Santa” 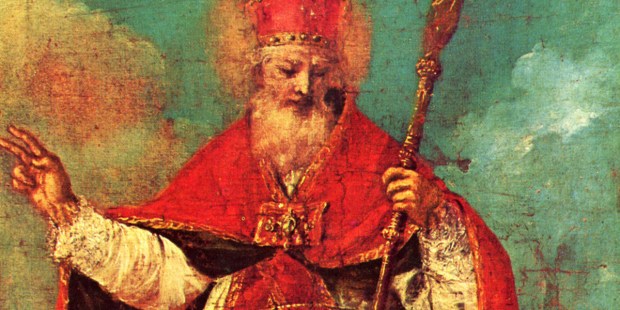 Even the oldest stories about St. Nicholas focus on his desire to secretly give gifts.

The modern-day mythical character of Santa Claus is well-known for being a secret gift-giver. This is due in part to a popular story surrounding the 4th century bishop, St. Nicholas of Myra.

The story is recounted in the Golden Legend, a compilation of medieval stories about many early saints of the Catholic Church.

And it was so that one, his neighbor, had then three daughters, virgins, and he was a nobleman: but for the poverty of them together, they were constrained, and [had the intention of selling them into prostitution], so that by the [money]…they might be sustained. When the holy man Nicholas knew hereof he had great horror of this villainy, and threw by night secretly into the house of the man a mass of gold wrapped in a cloth. And when the man arose in the morning, he found this mass of gold, and rendered to God therefor great thanksgivings, and therewith he married his oldest daughter. And a little while after this holy servant of God threw in another mass of gold, which the man found, and thanked God, and purposed to wake, for to know him that so had aided him in his poverty.

The man had no idea whom the secret gift-giver might be, but when St. Nicholas came a third time, he caught him in the act.

After a few days Nicholas doubled the mass of gold, and cast it into the house of this man. He awoke by the sound of the gold, and followed Nicholas, who fled from him, and he said to him: Sir, flee not away so but that I may see and know thee. Then he ran after him more hastily, and knew that it was Nicholas; and he kneeled down, and would have kissed his feet, but the holy man would not, but asked him not to tell nor discover this thing as long as he lived.

St. Nicholas gave gifts to those in need in the secret of the night and did not want anyone to know the truth of his identity.

Why didn’t he want anyone to know who he was?

The stories don’t give us the full details, but being a holy man, Nicholas likely found inspiration in the words of Jesus to his disciples.

When you give alms, do not let your left hand know what your right hand is doing, so that your alms may be in secret; and your Father who sees in secret will reward you. (Matthew 6:3-4)

St. Nicholas was the first “Secret Santa” and reminds us that the best gift-giving is that done from a loving heart, not desiring any personal recognition, but only desiring the good of the other person.

Read more:
Who was Santa Claus? Some quick facts about the legendary saint

Read more:
Here is what Santa Claus really looked like