Why you should have at least one older friend 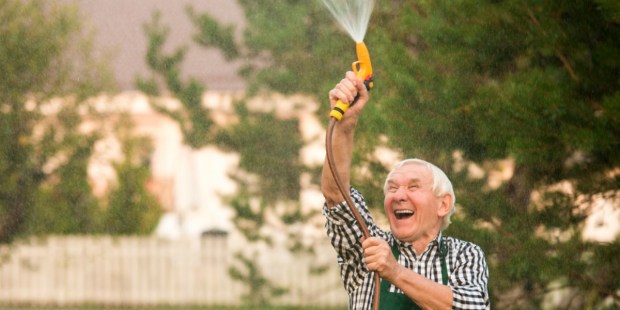 The friendship between St. Ambrose and St. Augustine shows us why…

When I was young, I wanted to hang out with the older kids. They seemed somehow mature and admirable. They had all the best Teenage Mutant Ninja Turtle action figures, water-balloon launchers, and they all had pegs on their dirt bikes — stuff that a 1st-grader like me didn’t have.

The older kids never did let me hang out with them, but looking back at it now, those kids a few years older than me didn’t really have all that much wisdom to offer, so I don’t think I missed much. You know who did let me hang out with them, though? My grandparents. On my father’s side, my grandfather would let us drive his tractor around the field, which was very impressive to me. My grandmother took me on walks with her retired friends. Before internet shopping, there used to be places known as “malls” and we would walk inside of them before the shops opened in the morning. My maternal grandfather would make us pancakes and let us help build a fire in the fireplace. Our grandmother would play cards with us for as long as we wanted.

Fast-forward to today and I love to spend time with my older parishioners. Their wealth of knowledge, kindness, and devotion to their spiritual lives is extraordinarily inspiring. When I look out at the pews during Mass, nothing makes me happier than to see these older parishioners mixed in, praying with younger generations, handing on the faith, and yes, occasionally getting distracted by babies during the homily. These older parishioners are vital to the health of our community, and as they befriend younger parishioners, they are a source of strength and wisdom for all of us.

It’s easy to only interact with our own peer groups. Those who grew up in the same sort of place, have the same cultural memories that were formed at a similar time, talk the same way, watched the same television shows, dress the same way…all of this makes for a comfortable and natural basis for friendship. But if the only people we’re friends with are just like us, we’re missing out on a lot.

Take the example of St. Augustine, who moved to the city of Milan when he was about 30 years old. He was becoming known for his skill as a teacher and speaker but in spite of this success, he was unsettled. His personal life was a mess, his mother was worried about him, and he was in the middle of a spiritual crisis. Augustine had heard of the famous bishop of Milan, a man named Ambrose who preached widely admired homilies. Augustine was curious and began to go to Mass to hear the older man speak. At first, he says, he was, “trying [Ambrose’s] eloquence, whether it answered the fame thereof, or flowed fuller or lower than was reported; and I hung on his words attentively; but of the matter I was as a careless and scornful looker-on….” He kept listening, though, and over time the words of Ambrose began to change him.

He wanted to meet Ambrose, but the bishop was a very busy man. Augustine says, “I could not ask of him, what I would as I would, being shut out both from his ear and speech by multitudes of busy people…” But eventually, he was able to establish a relationship with Ambrose, and the older man was happy to become his mentor. His advice proved invaluable, calming and guiding the younger man. Eventually, Augustine joined the Church and began to take steps to get his life together.

Ambrose was well aware of the value of friendship, especially friendships that challenge us to grow in new ways. In particular, he recommended the sort of friendship he developed with Augustine, where a younger person and an older person strike up a raport. His reasoning is simple: older people have a treasure trove of wisdom and life experience to share. He says to imagine you’re a tourist in a new area. The first thing all of us do is ask for recommendations – What’s the best beach to swim at ? Where’s the best restaurant ? Is there anyting we absolutely must do here before we leave ? When it comes to life, older people are the locals with all the expertise, younger people are the tourists. We’d be silly not to ask for directions from those who have more experience.

Recently, the idea of having an older friend has been catching on in some interesting ways. For instance, some preschools are now located in retirement homes. In other places, college students become “roommates” with retirees. Participants in both of these programs talk about all the benefits, ranging from “having a hundred grandparents,” to coming to terms with the reality of death.

I realize that generational conflict is a fact of life. Older people dismiss younger people as unserious and younger people write off older people as out of touch. Neither of these stereotypes is true, though, and all we need to do to shatter them is a real, authentic friendship. Generational conflict may be commonplace, but that doesn’t mean it should be. What if Augustine had dismissed Ambrose as an irrelevant dinosaur, an artifact of an older era ? His life would have continued spiraling out of control. He never would have written his great philosophical books and all of humanity would have been impoverished. A single relationship with an older person can make all the difference, even if the only life you change is your own.

Read more:
This is how friendship can transform you

Read more:
How to make real-life friendships with your social media friends