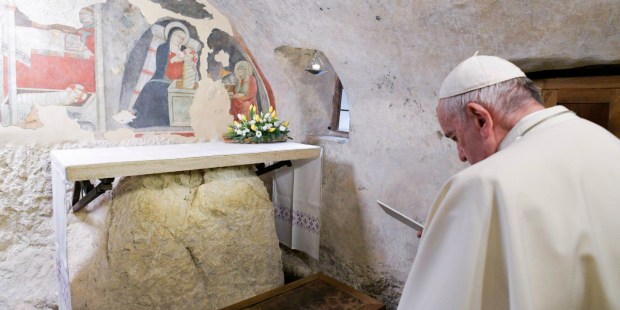 The pope recalls his namesake’s inspiration to re-create the first Christmas in the caves of Greccio in 1223, and what’s come of that idea

Pope Francis has recalled how his namesake is credited with creating one of the most universal and special Christmas traditions, the nativity scene, by making a visit to the spot where it happened and releasing an apostolic letter about the value of these scenes.

The pope’s visit to Greccio was brief: He prayed at the site where the saint created the first nativity scene. Today frescoes from the 14th century adorn the cave’s walls, depicting Mary breastfeeding the Christ Child and Saint Francis kneeling in adoration.

“There is no need for many words here, because the scene before our eyes expresses the wisdom we need in order to grasp what is essential,” he said.

The pope’s letter urges that the tradition of nativity scenes in private and public never be lost. He also considers the symbolism of each of the figures that are found in the scene.

In addition, the Holy Father briefly recounts how the tradition began with St. Francis in the town of Greccio.

The origin of the Christmas crèche is found above all in certain details of Jesus’ birth in Bethlehem, as related in the Gospels. The evangelist Luke says simply that Mary “gave birth to her firstborn son and wrapped him in swaddling cloths, and laid him in a manger, because there was no place for them in the inn” (2:7). […]

But let us go back to the origins of the Christmas crèche so familiar to us. We need to imagine ourselves in the little Italian town of Greccio, near Rieti. Saint Francis stopped there, most likely on his way back from Rome where on 29 November 1223 he had received the confirmation of his Rule from Pope Honorius III. Francis had earlier visited the Holy Land, and the caves in Greccio reminded him of the countryside of Bethlehem. It may also be that the “Poor Man of Assisi” had been struck by the mosaics in the Roman Basilica of Saint Mary Major depicting the birth of Jesus, close to the place where, according to an ancient tradition, the wooden panels of the manger are preserved.

The Franciscan Sources describe in detail what then took place in Greccio. Fifteen days before Christmas, Francis asked a local man named John to help him realize his desire “to bring to life the memory of that babe born in Bethlehem, to see as much as possible with my own bodily eyes the discomfort of his infant needs, how he lay in a manger, and how, with an ox and an ass standing by, he was laid upon a bed of hay.”

At this, his faithful friend went immediately to prepare all that the Saint had asked. On 25 December, friars came to Greccio from various parts, together with people from the farmsteads in the area, who brought flowers and torches to light up that holy night.

When Francis arrived, he found a manger full of hay, an ox and a donkey. All those present experienced a new and indescribable joy in the presence of the Christmas scene. The priest then solemnly celebrated the Eucharist over the manger, showing the bond between the Incarnation of the Son of God and the Eucharist. At Greccio there were no statues; the nativity scene was enacted and experienced by all who were present.

This is how our tradition began: with everyone gathered in joy around the cave, with no distance between the original event and those sharing in its mystery.

Thomas of Celano, the first biographer of Saint Francis, notes that this simple and moving scene was accompanied by the gift of a marvellous vision: one of those present saw the Baby Jesus himself lying in the manger. From the nativity scene of that Christmas in 1223, “everyone went home with joy”.

With the simplicity of that sign, Saint Francis carried out a great work of evangelization. His teaching touched the hearts of Christians and continues today to offer a simple yet authentic means of portraying the beauty of our faith.

Read more:
Bishop reinstating Confraternity of Our Lady of La Leche at oldest shrine of USA