Alfie, the “little angel” of Edinburgh 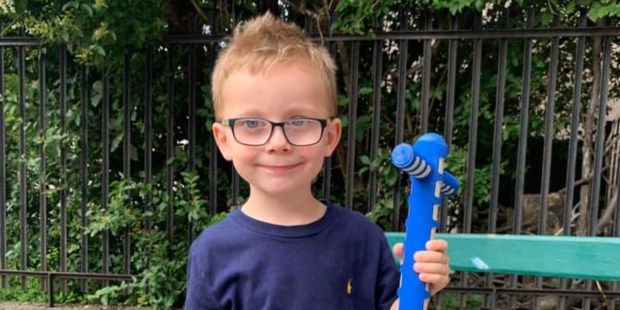 The 6-year-old accompanies his father to bring hot coffee to the homeless.

As Christmas and the winter solstice draw near, the long cold nights are becoming more and more difficult for people in the Northern Hemisphere who are homeless and sleep outdoors. For some of them in Edinburgh, Scotland, though, there’s at least one good thing to look forward to in the early morning when they wake: a visit from a little “angel” named Alfie.

Alfie Roncero, 6 years old, has started accompanying his father early on Saturday mornings to make rounds along Princes Street, “offering hot drinks, a friendly word, and a smile,” as reported by Shona Elliott of The Scotsman.

Princes Street is the main shopping street and one of the main thoroughfares in the Scottish capital. Alfie had frequented the area with his 36-year-old father, Richard, and recently started to ask his father “why people are always sitting on the ground,” referring to the homeless people living there, Richard told the reporter.

Richard understands all too well the problems faced by the homeless, who are often in that dire situation due to drug addiction. He suffered from a cocaine addiction for much of his life, and spent some time living on the street, according to Sarah Ward of the Daily Record, before turning his life around through a 12-step program.

Since then, he founded “Steps to Hope,” an Edinburgh charity with 46 volunteers, which works to help end homelessness caused by addiction and to provide food through soup kitchens. Richard regularly gets up at 6 a.m. to buy coffee he distributes with the volunteers to people who’ve spent the night outdoors. “I go into cemeteries, the back streets, Princes Street Gardens and count how many people we can see. Then we buy the coffees and deliver the hot drinks and information leaflets to them.”

Passing on the lesson

So, when Alfie asked what was going on, Richard decided it was time to bring his son with him on one of his morning rounds. “I wanted to teach him that we need to be kind to people. I think it’s so important to show our kids that no matter where we end up in life, we should always show love, respect, and compassion to other people,” Richard told The Scotsman.

“When handing out the coffees, Alfie said that ‘these people must be really cold.’ This was Alfie starting to see what being homeless truly means and the struggles they face,” he continued. “I want to instill morals and values into my son so he grows up not judging people, but willing to reach out and help where he can.”

The response to Alfie’s visit is positive; apparently, his smile plus a cup of hot coffee really warms hearts. One woman reportedly called him a “little angel,” according to reporter Sarah Ward of the Daily Record.

“Alfie is a very clever little boy and has such a kind heart. I’m really proud to call him my son,” says Richard.

It’s not the first time Richard has taken one of his children out to help the homeless; four years ago on Christmas Day, he took his daughter Courtney (then 16) out to help distribute warm clothing. It became a tradition they repeated in following years.

“I was thirsty, and you gave me drink …”

“I was hungry and you gave me food, I was thirsty and you gave me drink, a stranger and you welcomed me, naked and you clothed me … Whatever you did for one of these least brothers of mine, you did for me.” These words of Christ inviting the righteous into heaven (Matthew 25:35-6,40) naturally come to mind, as do those of the apostle James: “If a brother or sister has nothing to wear and has no food for the day, and one of you says to them, ‘Go in peace, keep warm, and eat well,’ but you do not give them the necessities of the body, what good is it?” (James 2:16)

Not everyone is in the position to distribute hot coffee or warm clothes to the homeless, but all of us can do something, whether it be to donate food, clothes, or money to organizations that directly help those in need, or to volunteer our time. Especially at this time of year, let’s not forget to share the blessings for which we have so recently thanked God with those who, like the Christ Child on Christmas, have no proper place to lay their head.

Read more:
What one woman did to keep the homeless safe when then polar vortex arrived in Chicago

Read more:
The day I saw a homeless woman wearing one of my family heirlooms