Pope: World sometimes seems to be afraid to remember what Christmas really is

The Italian dioceses of Trento, Padua, and Vittorio Veneto were the donors of the Vatican Christmas tree and Nativity scene this year.

The tree lights were turned on in a ceremony on the evening of December 5. The spruce is some 85 feet (26 meters) high.

The Holy Father thanked the people of the dioceses, also praising the initiative to replant 40 fir trees to replenish the forest, which was damaged by a storm in 2018.

The Christmas crib is made almost entirely of wood and composed of architectural elements characteristic of the Trentino tradition.

“The wooden trunks from the areas affected by the storms, which serve as a backdrop to the landscape, underline the precariousness in which the Holy Family found itself on that night in Bethlehem,” said the pope.

The Holy Father recalled how just some days ago, he went to Greccio, where St. Francis created the first “living Nativity,” the predecessor of the tradition of Christmas cribs all over the world.

The pope released an Apostolic Letter there, Admirabile signum, dedicated to the Christmas crib, “which is a simple and wonderful sign of our faith.”

The pope urged that the tradition of Nativity scenes be “handed down from parents to children, from grandparents to grandchildren. It is a genuine way of communicating the Gospel, in a world that sometimes seems to be afraid to remember what Christmas really is.” 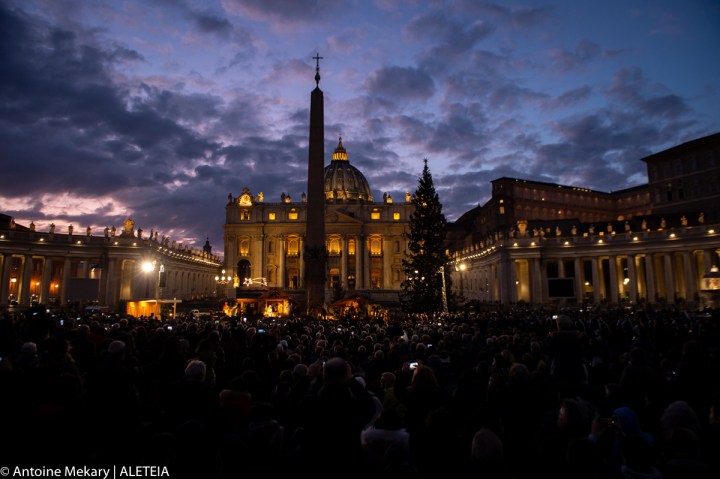