Ethiopia’s rock-hewn churches were once considered the “New Jerusalem”

The construction of these churches is believed to have been carried out with just hammers and chisels to carve doors, windows, floors, and walls out of solid rock.

Christianity’s roots in Ethiopia apparently go back to the time of the Apostles. In his Adversus Haereses, St. Irenaeus claims the Ethiopian eunuch featured in the eight chapter of the Book of Acts “was  sent into the regions of Ethiopia, to preach what he had himself believed, that there was one God preached by the prophets, but that the Son of this (God) had already made (His) appearance in human flesh, and had been led as a sheep to the slaughter; and all the other statements which the prophets made regarding Him.” By the 4th century, Christianity had already been adopted as the Ethiopian state religion, during the reign of the Aksumite emperor Ezana.

Read more:
Climbing a 400-meters-tall cliff to get baptized in Ethiopia

In the Ethiopian mountains of the Amhara region stand 11 churches of unique design, each one carved from a single monolith.These medieval-era structures are attributed to King Lalibela, a 12th-century ruler who ordered their construction after he made a 1,200-mile journey to Jerusalem only to find that it had been conquered by Muslim forces, who had halted Christian pilgrimages to the Holy City.

These churches were described by the Portuguese priest Francisco Alvares, one of the first Europeans to see the churches, as among the world’s great wonders:

“I weary of writing more about these buildings, because it seems to me that I shall not be believed if I write more … I swear by God, in Whose power I am, that all I have written is the truth.”

The 11 churches of the region, which became known by Lalibela’s own name, were intended to become a new capital for Christian pilgrimage and worship, a kind of “New Jerusalem.” These impressive monolithic buildings draw Orthodox pilgrims from all across the country for the holy days, some of them traveling on foot for months to reach Lalibela, protected as a UNESCO World Heritage site since 1978.

CBS’s Scott Pelley held an interview with Tsigie Selassie Mezgebu, the head priest of Lalibela at the church of St. George, who explained the pilgrimage that thousands take each year. “These are believers,” he said. “Not just three days, even three months sometimes. When there was no air travel or buses, people used to travel from various parts of the country for months, to come here and celebrate with us.”

Read more:
The oldest, most complete Gospel book on Earth is in Ethiopia

Little is known about the people who built the Lalibela churches, and a popular belief among the faithful of the region is that they had help from angels. The construction of these churches is believed to have been carried out with just hammers and chisels to carve doors, windows, floors, and walls out of solid rock.

Unfortunately, these impressive testaments to Ethiopian medieval architecture have fallen into disrepair after several centuries of neglect. While the churches continue to function, repairs and maintenance are strictly regulated, as the stone is considered holy by the Ethiopian Orthodox. All preservation work is considered and debated before commencing, and even then, any dust from the work is collected and saved by the priests.

In order to protect the sandstone structures from rain, which slowly deteriorates the stone, the communities have erected large roofs that rise above each church. Protection from the rain, however, has created more problems as the dry stone is threatening to crumble. While the threat is real, the sites are in no danger of imminent destruction and are expected to stand for at least another millennium, if cared for properly. 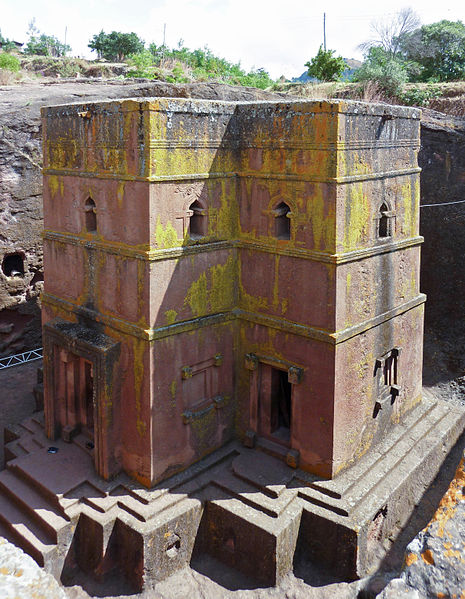