This monastery was built into the Mount of Temptation, where Jesus was said to have been tempted by the devil

The Greek Orthodox Monastery of the Temptation of Jesus was built in the 4th century.

The Mount of Temptation, overlooking the Judean desert, is, according to tradition, the mountain on which Jesus was tempted by the devil during his 40-day fast. Built into its steep rock face clings the Greek Orthodox Monastery of the the Temptation of Jesus. 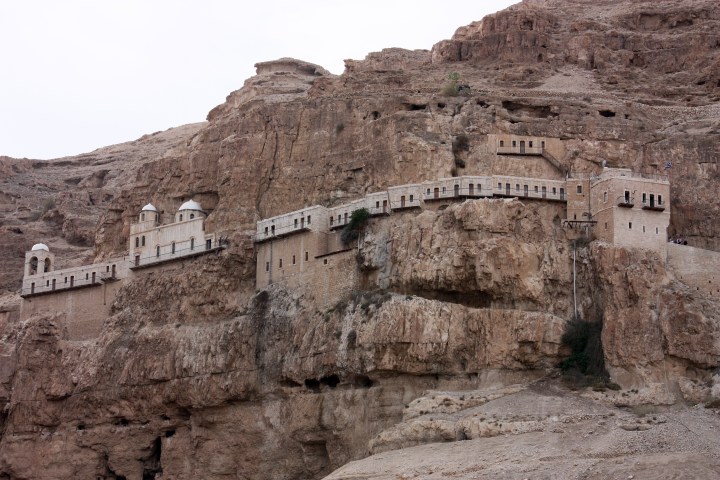 As recorded in scripture, in Matthew (4:1-11), Luke (4:1-13), and Mark (1:12-13), Jesus was led into the wilderness by the Holy Spirit to be tempted by the devil. After fasting for 40 days and 40 nights, Jesus was approached by the tempter, who challenged him three times — to turn a stone into bread, to throw himself off the mountain, and to accept the offer of “all the kingdoms of the world” in return for his allegiance.

The 1,200-foot high limestone peak is also known as Mount Quarantania and Jabal al-Qarantal in Arabic. The name derives from the Latin word quarantena, which means 40, as in the number of days that Jesus fasted.

Monks and hermits have lived within the caves of the Mount of Temptation since the early days of Christianity. In 340, on the site of Hasmonean ruins, a monk named St. Chariton founded a monastery called the Laura of Douka, on the Mount of Temptation. The monastery, built by turning natural cave formations into cells and chapels, was destroyed during the Persian invasion in 614.

In the Middle Ages, the desert was home to thousands of monks and hermits, who came to live in the Judean wilderness as Jesus did.

The present-day Monastery of the Temptation of Jesus was rebuilt in the 19th century by the Greek Orthodox Patriarchate. Within the monastery is a staircase that leads to the very stone that tradition tells us marks the spot where Jesus sat while being tempted by the devil. The stone is part of the apse of the Chapel of Temptation.

The Mount of Temptation, which overlooks the Jordan Valley, with spectacular panoramic views of the Dead Sea and the mountains of Moab and Gilead, is about three miles from Jericho in the West Bank of the Jordan River. The summit can be reached by in a 30-minute walk by way of a steep steep path that runs by the monastery. Since the 1990s, visitors have also been able to ascend the mountain by a cable car from Jericho. Located in a Palestinian-controlled part of the West Bank, Jericho is a 25-minute drive from Jerusalem.

The Monastery of the Temptation of Jesus is open to both men and women (unlike some sites administered by the Orthodox Greek Church) from 9 a.m. to 1 p.m. and 3-4 p.m. on weekdays, and from 9 a.m. to 2 p.m. on Saturdays.