What I learned as a convert about the Immaculate Conception 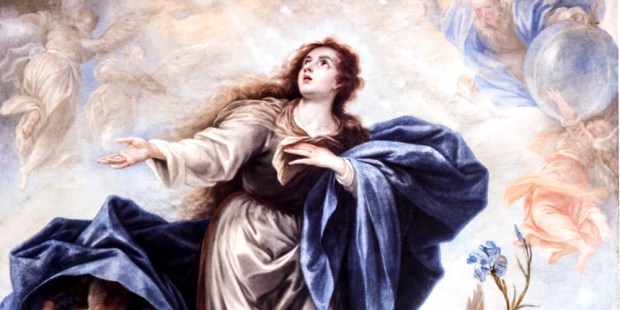 When I realized what this dogma actually means, I almost bolted …

When I first began to explore Catholicism, I was feeling pretty overwhelmed. The lady running the Catholic book store where I shopped for resources advised me to take one thing at a time — to take each new concept, doctrine, or devotion and sit with it. She encouraged me to just “chew on it a while” before I moved on to something else.

That proved to be excellent advice. Many of the doctrines and practices I read about took a lot of prayer and study to grasp. One dogma I did not expect to have trouble with was the Immaculate Conception. After all, as a Protestant I fully believed that Jesus had been conceived “immaculately” — that is, by the power of the Holy Spirit and born to a virgin. Imagine my surprise when I realized that that is not what the Immaculate Conception is and that it actually refers to Mary’s conception and the belief that she was conceived free from original sin.

This came as quite a shock to me. I mean, I knew Catholics were big on Mary, but I didn’t know they thought she was sinless. It was at this point in my conversion process that I almost bolted. But I followed the bookstore lady’s advice and just sat with this for a while. And I read and prayed. This is what I learned.

1
Sinless does not equal divine

Catholics do not believe that Mary is divine. I’d heard that Catholics worship Mary, and the doctrine of the Immaculate Conception certainly seemed to confirm these rumors. But a belief in Mary’s sinlessness does not mean a belief that she is divine.
In fact, she wasn’t even the first person God created sinless. Adam and Eve were also created in a state of sanctifying grace. Even though Mary’s Immaculate conception was a gift from God, she was actually just created to live in the same state that we were all created to live in before the fall of man. We tend to think of Mary as having some sort of superhuman gift, and the gift of her Immaculate Conception is no doubt incredible, but in reality, she was simply created to be what all humans were originally meant to be.

2
Immaculately conceived does not mean savior-less

When the Fathers and writers of the Church meditated on the fact that the most Blessed Virgin was, in the name and by order of God himself, proclaimed full of grace by the Angel Gabriel when he announced her most sublime dignity of Mother of God, they thought that this singular and solemn salutation, never heard before, showed that the Mother of God is the seat of all divine graces and is adorned with all gifts of the Holy Spirit. To them Mary is an almost infinite treasury, an inexhaustible abyss of these gifts, to such an extent that she was never subject to the curse and was, together with her Son, the only partaker of perpetual benediction. Hence she was worthy to hear Elizabeth, inspired by the Holy Spirit, exclaim: “Blessed are you among women, and blessed is the fruit of your womb.”

Or perhaps we could think of it in simpler terms along the lines of a Catholic Answers explanation: If a man is walking through the woods and falls into a pit, and I reach down and pull him out, I have saved the man from the pit. On the other hand, if a different man is walking through the woods, and I yell, “Hey! Look out for that pit.” I have also saved that man from the pit. I just saved him before he fell. God saved Mary. But he saved her before her fall.

Mary was given this special grace because she is the Ark of the New Covenant. In the Old Testament, the Ark of the Covenant was God’s dwelling place. God came to the people of Israel in and through the Ark. And when He instructed the Children of Israel how to build His dwelling, God gave very specific instructions, including that it be made of pure gold (Exodus 25).
As most Christians know, the Old Testament is a foreshadowing of things to come. The New Testament fulfills the old. When Jesus came into the world to be with us, He came through Mary, and once again, God prepared a pure and perfect dwelling for himself.

The Immaculate Conception is biblical.  When the Angel Gabriel greeted Mary as “full of grace,” he meant it. Catholic Answers explains it this way … The grace given to Mary is at once permanent and of a unique kind. Kecharitomene [the Greek word for Gabriel’s greeting to Mary] is a perfect passive participle of charitoo, meaning “to fill or endow with grace.” Since this term is in the perfect tense, it indicates that Mary was graced in the past but with continuing effects in the present. So, the grace Mary enjoyed was not a result of the angel’s visit. In fact, Catholics hold, it extended over the whole of her life, from conception onward. She was in a state of sanctifying grace from the first moment of her existence.

Read more:
The surprising day when the devil himself praised Mary’s Immaculate Conception