Spanish photographer gets surprise call from pope days before Christmas 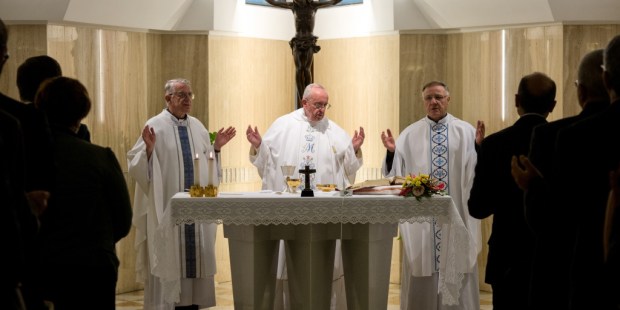 Here’s one for the folks who never answer an unrecognized number.

Daniel Ibanez is the Vatican photographer for Catholic News Agency and EWTN. The Spanish native sees Pope Francis quite a lot, but always as he is working, taking photos during papal Masses and events.

Last year, the 27-year-old wrote a letter to the pope, expressing his desire for the opportunity to experience Francis as an ordinary Catholic would.

Two months later, his cell phone rang, and the words “private number” appeared on his screen. Some people might just let such a call go to voicemail, thinking it’s another telemarketer.

Not Ibanez. He answered, and a man with an Argentinean accent greeted him.

“This is Francis,” he intoned. “I received your letter.”

“I effectively stayed frozen, because I was speaking with the pope,” Ibanez said of the phone call he received last December. In an interview with CNA, he said the pope invited him to the Mass at Casa Santa Marta, the Vatican guest house and papal residence, on December 20, 2018, saying it would be “the last I publicly celebrate in the Vatican” before Christmas.

In the five-minute call, the pope gave directions for what the young man had to do in order to attend the private Mass, patiently repeating the instructions for the stunned Ibanez four times. The pontiff also asked his pardon for not responding to his letter sooner, a gesture that touched and surprised Ibanez.

When the day finally arrived, Ibanez went through the required security checks and entered the chapel, ending up in the front row. After Mass, the pope greeted each person individually, and Ibanez introduced himself. He gave the pope two photos he had taken of him, as well as a letter from a young woman who wrote about her elderly uncle, a retired priest in Spain. Pope Francis called the priest a few months later, and spoke with him for about an hour. CNA continued:

Ibanez also told the pope about his friend, a wife and mother who had been diagnosed with terminal cancer a few days prior. Francis put his hand over the woman’s photo, staying in silence for some seconds. In that moment, “I felt that he is a very empathetic person, who listens,” he said.

Then, before the pope left, Ibanez asked if he could give him a hug, and the two embraced.

Ibanez said he remembers one part of Pope Francis’ homily that day in particular: “God enters history and does so in his original style: a surprise. The God of surprises, surprises us.”

Perhaps no one was more surprised that day than Daniel Ibanez.